My mom has been doing a lot of genealogical research lately, and one ancestor in particular, Nancy Regina Davis Pool, has really stood out to us. She had a tragic life, but she handled it with grace (and I very much want to write a novel about her someday). My mom's been talking about how learning about Regina's life (that branch of the family all went by their middle names) really gives a new perspective on these times we're living in. So I told her she could write a guest post for my blog. Here it is!

During this crazy and unsettling time dealing with the coronavirus and all of its associated fear, I have spent a lot of time looking into family history. It all started before the lockdowns, because I wanted to gather whatever information I needed to join the Daughters of the American Revolution, but because it is fascinating to find out where you came from, it became a much needed diversion from the news of the day.

I know you shouldn’t choose favorites among your relatives, but the more I dug into my family, especially the connections leading to the DAR, the more I have been drawn to the story of my third great grandma, Nancy Regina Davis Pool. I’ve known about Nancy Regina (known as Regina) most of my life, because the family Bible from her life with her first husband, George Washington Pool, passed down through the eldest or only sons and has been at my grandparents’ house my whole life. It was pulled out every so often and we were shown various clippings, letters and documents that Nancy Regina saved. 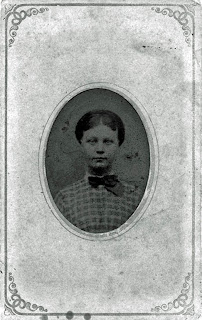 I had lost my copies of scans of the Bible documents due to a hard drive failure over 15 years ago, but during this time of family research, my uncle sent me the documents again. The more I read of what Regina saved, the more I like her, and the more my perspective on our current circumstances changes.

Nancy Regina was born in 1854, the eldest child of John W. Davis and Mary E. (Baughn) Davis. Her grandparents (James and Mary Ann Davis) were founding members of the Brush Creek Baptist Church in Jennings County, Indiana, and donated the land where the church was built. Her father was apparently the last deacon of the church (according to a newspaper clipping.)

Regina married George Washington Pool in 1873. Her first child, William Henry, was born in 1874. Her second son, John Harvey (my 2nd great grandpa) was born in 1876, followed by her only daughter, Elizabeth Pearl, in 1878. In November of 1879, George W. died of “fever malarias.” She was pregnant with her fourth child, George Everett, born in February of 1880.

Widowed at 25, with four children, in 1880, could not have been an easy life. She didn’t remarry until 1901, at age 47, so she raised her kids alone, presumably with the help of her parents and her church. As if being a widow with four children wasn’t enough to bear, more sorrow and tragedy came into her life. In 1888, little 9 year old Pearl Pool caught fire when home alone from an accident while building a fire in the stove. She lived about a week after the accident. Then her oldest son died in 1893, at age 18, of unknown causes, after being unconscious one morning for several hours. 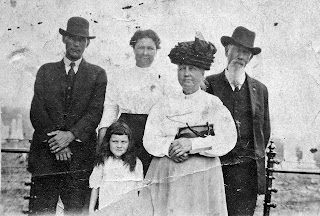 Newspaper clippings and letters Regina saved tell us a lot about how she approached her sad and tragic life. A sympathy letter she saved after the death of her daughter urges her not to blame herself for the tragedy, and states this: “You may wonder why this great grief should come upon you when your(?) going on quietly, doing the best you could for yourself and your children, as harming no one. Remember, my dear friend, God’s ways are so far above our ways, and his thoughts above our thoughts, that we can not understand much of what he permits, to come upon us, as also the many things he designs for us…your little Pearl is safe come what may. Satan hath no power to reach her where she is, or in any way mar her happiness. I dare say you would not now, if you could bring her back from her world of joy, even though you know she would make just the kind of a woman you would wish. You would not want her to taste as many of life’s trials as have touched your own lips(or life)….I know your own Christian experience is such that you are willing to accept God’s dealings even if you cannot understand them…”

Articles saved from after the death of her oldest son show that she raised her kids in a Christian home. This is an excerpt from Willie’s obituary: “Wm. H. Pool, of Butlerville, Ind., a young man of promise and an earnest follower of the Lord Jesus Christ, passed suddenly from his labors here to his reward on high May 25, 1893, in the nineteenth year of his age. When but a boy, Willie was bereft of his father, but being the oldest of the family, he applied his youthful mind with almost the energy and skill of riper years, to make home and his widowed mother and his little brothers just as pleasant and as comfortable as possible. He was the staff to the household and more, he was a devoted Christian, having given his heart to Jesus at the early age of 13 and since honored his profession by his godly walk in the world. His people are grieved sorely as well as his many friends, over whom he exerted so noble an influence, but they sorrow not as they have no hope, for in that sweet by-and-by we expect to meet him again.” Another news article reporting his death states this: “His death occurred just at eight o’clock last Friday morning after an illness of but three hours, during which time he was never conscious. Willie was a model young man but 18 years of age and a prominent and consistent member of the Baptist church here and as we believe died triumphant.”

By this time, only two sons survived, John Harvey and George Everett. Newspaper clippings Regina saved indicate that George Everett moved to Illinois and was involved in evangelism as part of the Volunteers of America, which was similar to the Salvation Army. When Everett came home to visit, the newspaper reported this: “They held a nice service on our streets Sunday evening, there being no services at the local churches. The use of the church building was offered them, but they preferred the outdoor auditorium and had a good hearing.” The newspaper also reported on another gathering when Everett was in town: “Everett Pool and wife and Harvey Pool and wife, assisted by local talent, held a gospel street meeting at the Brogan-Perkins corner Saturday evening.” (Note—notice nearly everyone in this family goes by their middle names. My grandpa and great grandpa also went by their middle names. I guess it’s a thing in our family.)

Nancy Regina passed away in 1927. Her son, John Harvey (my great great grandpa), passed away in 1936. His obituary states the following: “He was one of the faithful workers in the Rodney church and all its activities, having been a teacher for several years. The weather was never too bad or the nights too dark for him to go with his family to his church services. He was a kind and helpful neighbor, a devoted father to his children and a true and faithful companion.” 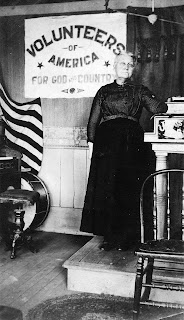 What, you may ask, does this have to do with our present circumstances? Not a lot, really, until you look at the bigger picture and compare Nancy Regina’s life and circumstances to how we live today. She lost her husband, daughter, and son, all in unpredictable ways. She could have retreated into bitterness and fear, but by all evidence we have before us, she lived every day of her life in the knowledge that God is the one who gives us as many days as He has ordained, and it isn’t something she needed to fret about. All she could do is live a faithful life and pass along her faith to her children. It is obvious she did so, from what evidence she left in what she chose to save in the family Bible.

I look at her very tragic life and the way she kept going and I wonder why I should be afraid of this virus or any other illness. We have more advanced medical treatments at our disposal, but still, even with all that, God has ordained my days, and I have to make the most of the days he has given me. I have a much easier life today than Nancy Regina did, and have not experienced anywhere near the traumas and trials she experienced. I truly believe when Regina died, God said, “Well done, good and faithful servant.” And so, she has become one of my favorite ancestors (although my dear grandma will always be at the top of the list...I look up to them both for similar reasons.) May we all look to examples like Nancy Regina and put our lives into an eternal perspective.
Posted by Morgan Huneke at 6:00 AM