And I almost forgot I was supposed to have a blog post this week. I'm ahead, but planning on trying to keep going at this pace until I finish this book. Almost to the midpoint. And I'm still liking how it's going. It seems more solid and consistent, though I don't know how that'll hold up in the second half where I'm planning to make a number of changes.
Well, I say planning, but the changes are vague pictures in my head, so there'll be a lot of making it up as I go along. Really, though, I do have a better understanding of what's going on in the story and why, and of some things I forgot to touch on before, I just don't know exactly how it's all going to play out. Don't worry, I'm still planning on doing the horrible things to Mitchell I did last draft. 😉
Have some snippets.

I heave a sigh and shake off [Mitchell's] hand. “Grace is making it exceptionally difficult to pack. You and Brian are both going to get it for not backing me up. She’s sent me five hundred million different options for bridesmaid dresses, and that’s not even counting flower arrangements and wedding dresses. And she doesn’t seem to understand that I have something actually important to do right now.”
“Grace’s wedding is important,” Mitchell says. “It is only important in a different way from our mission.”
I snort. “Sure, getting married is important, but flowers? Who cares about flowers?”

“She’s asking for my opinion on flowers,” Emma groans. “If it was up to me, there wouldn’t be any flowers.”
I choose to refrain from responding to the statement. “How is the conversion process progressing?”
Emma snorts. “It’d be a lot faster if I didn’t have to manually check each one for accuracy. But some of their clerks have horrendous handwriting, and it’s super difficult to decipher the letters when the translator can’t even identify them. I mean, at least Ebrarian alphabet isn’t all that different from Arabic. This stuff? It’s a mess.”

He kneels down to her level. “My name iss Mitchell. We have come to help.”
Gia flashes a gap-toothed smile up at me. “I know. She tole me. And ain’t that what Acktorek’s for?”
Yeah, that’s what it’s supposed to be for. But that isn’t always reality.
No, Delma’s in jail. Breach control was pretty much cleaned out. Things aren’t like that anymore. But then, they never should have been in the first place.

I narrow my eyes. “What about doctor/patient confidentiality?”
“She did not provide specifics, but she was required to provide the department with a statement prior to your approval for duty.”
I drop my gaze. Not really feeling betrayed, but I still don’t think Dr. Wilset is right. How could she be?
Without any kind of warning, Mitchell pulls me into his arms again. I curl into his chest, relishing his warmth and solidity. I know I’d fall apart completely without him. I still feel like I’m falling apart even with him. And I still don’t think I’m the best one to help those kids. Or that I’ll be able to care at all for any other person we’re sent to save. But I’m here. We’re here. And somebody has to do it.
“The only certain way to fail is not to attempt it at all,” Mitchell murmurs against my hair.

Yup, it's NaNo again, which means...I don't have an actual blog post. Nothing profound to say because I'm pounding the keyboard to get half of this draft done by the end of the month. Planning to try to keep up the pace through May to finish it, but we'll see. My brain is usually pretty done at the end of NaNo.
I'm working on the third draft of Acktorek Book 2: The Vanished. It's going pretty well, I think I've finally figured out some things that didn't make sense before, and I'm looking forward to seeing how this all plays out.
Not every day has been amazing, but I've managed to stay ahead so far this time and write every day. Which is rare. Reaaaally hoping to get that "update your word count every day" badge.
Follow my Instagram for my progress...I've been posting my word count almost every day in my story with little updates. But here's what we're looking like right now. (Technically, these screenshots are from yesterday.) 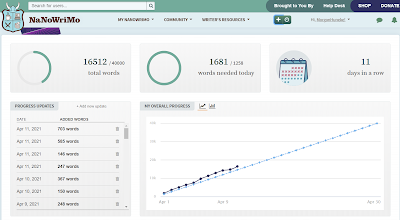 Here, have a snippet.

I pull a flat square out of my backpack and look around for a place to stick it. The sensor will bond to any surface, so that’s not a problem. But it’s not so hardy that if people constantly walk into it or if something falls on it, it won’t be damaged. It’s sensitive equipment. Problem is, I’m not really all that sure the storefront won’t fall over, or at least that the poor excuse for an awning won’t collapse on top of wherever I put it.
“Is you ’ere from Acktorek?”
My gaze snaps to the speaker: an unbearably thin girl with skimpy, shimmery red braids and dirt smeared over her dark face. Her dress is so tattered and patched and stained it’s impossible to tell what color it used to be. Somehow she looks bright and hopeful. And definitely the friendliest person I’ve seen here. She can’t be any older than six. Which puts her squarely in the risk category. From what factors we know. I know we’re missing something crucial. Hopefully something that excludes this little girl. I don’t like the way my heart constricts looking at her.
“Yes, I am.” I do my best to answer her calmly and gently, mostly trusting my translator will get that across. “My partner and I are here to help you. My name is Emma.”
“Me name’s Gia. What’s that?” She points a bony finger at the sensor.
“This . . .” I hesitate, not sure how to explain it to her. Then I just lower my hand so Gia can get a better look. “This will, um, sense what’s happening around here so we can figure out why people are disappearing.” If we knew what we’re looking for. Hopefully it’s obvious. Though I don’t really want more kids to have to vanish just so we can figure it out.