It's impossible to know me and be unaware of how much I love science fiction and fantasy. It's just a big part of what makes me me. And so it's not probably a surprise that when my English professor said we could write our research papers on pretty much anything as long as we could research it and make an argument about it, I decided to write about speculative fiction. More specifically, the role speculative fiction plays in the Christian community.
It's not really a secret that said role can be rather controversial. One need only look at Harry Potter to see that. So I set out down a rabbit hole of research on the objections to and defenses for science fiction and fantasy in the Christian community. It was a fascinating research subject, and I wanted to share the results.
Some believe speculative fiction is occult and evil. Some believe it is a good thing that can be used for God's glory. Where do I fall? I'm sure you can guess, but go on this journey with me anyway to explore my conclusion and how I came to it.
Speculative Fiction: Dangerous Occultism or Witnessing Tool?
When I was young, I went through a phase where I struggled to understand the efficacy of prayer. I believe God is sovereign and in control, and that nothing happens that is outside of His will. So what good does it truly do to pray? As I pondered this, a passage from C. S. Lewis’s The Magician’s Nephew sprang unbidden to my mind:

“Well, I do think someone might have arranged about our meals,” said Digory.
“I’m sure Aslan would have, if you’d asked him,” said Fledge.
“Wouldn’t he know without being asked?” said Polly.
“I’ve no doubt he would,” said the Horse (still with his mouth full). “But I’ve a sort of idea he likes to be asked.” 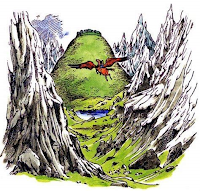 From this I understood instantly that while God does know everything and He is sovereign, He still wants us to pray, to deepen our relationship with Him as well as our understanding that everything we have comes from Him. He wants us to ask. From that point forward, I ceased to struggle with this particular issue—all because of a few lines in a fantasy story. And this is only one example of spiritual understanding gained from speculative fiction.
Yet some allege that these very stories and others like them which deepened my understanding of Scripture, illustrated biblical truths, and enhanced my faith are inherently harmful and evil, rather promoting such things as occultism, humanism, and witchcraft. Many of my fellow writers within the Realm Makers community have faced backlash from family and church family for writing stories of magic, dragons, aliens, and more.
Is there merit to these accusations that these stories we write tamper with the forbidden? Or is it rather true, as others assert, that speculative fiction is the perfect vessel for spreading God’s truth and reflecting the creative aspects of His nature? I contend that while these genres of fantasy and science fiction must be handled with care and a solid grounding in Scripture as a result of certain genuine concerns, they are nevertheless effective vessels for conveying God’s truth and furthering His kingdom by exploring truth in new and imaginative ways.
Speculative Fiction: The Question of Magic
References
“Christian Science Fiction & Fantasy Explained.” Performance by Steve Laube, YouTube, Enclave Publishing, 10 Sept. 2015, https://www.youtube.com/watch?v=OelI7pD6-jQ&amp;t=73s. Accessed 30 Sept. 2021.

A Word About Legalism

Rules.
Check boxes.
Formulas.
Works.
The longer I live in this world, the more I see that legalism doesn't work. In fact, more often it creates even more problems.
My family didn't have a lot of rules when I was growing up. Sure, we had some:

Don't go past Hannah (next door neighbor)'s house. (Our parents wanted to be able to see us when they looked out the window.)
No dancing in the kitchen. (Um, I still turn pirouettes in the kitchen and I never got in trouble for violating the rule...I just try not to dance when there's something hot on the stove or someone's walking around with a knife.)
Read the book before watching the movie. (Mostly just applied to me, but I still generally try to abide by it because the book usually came first which means it's the original version.)

But my parents never wrote up a list of moral rules for us to follow. They never bought booklets telling them that if they just did these things they'd automatically have good children.
That isn't to say everything was permitted. That isn't to say we didn't have a moral code. That isn't to say we never got in trouble. (Looking at the chief culprit right here.)
But it was never about the things we do externally. It's about the heart. And once you get the heart right, the behavior follows. Out of the heart the mouth speaks.
I've known a number of families who are or have been legalistic, and I've watched others from afar. And it's disheartening how badly it turns out.
Girls can only wear skirts.
Filtering kids' shows through ClearPlay, or not even owning a TV.
Bible reading as punishment.
Don't do any kind of work on the Sabbath, ever, without exception.
Shunning stories that contain magic, even if they have positive, or even Christian, messages.
Refusing to celebrate traditional Christian holidays because the traditional celebration is not spelled out in the Bible, even if the reason we celebrate is.
No grace.
I don't want to get into the weeds here. I'm sure if you're reading this, you can think of plenty of legalistic rules, and maybe have been raised according to them yourself. The point here isn't what precisely the rules are. The point is...that rules aren't the point.
What I've seen in my personal experience is that those who are most legalistic are very likely to have their children walk away. Even if those children at one point seemed to be fine.
Because what I've seen is that, even back in Bible times (think of the Pharisees), those who have lists of rules are just following rules. Sometimes they seem to think that they must do x, y, and z in order for God to be pleased with them. And often—not every time, but often—I sense a holier-than-thou attitude out of these people. Like they believe God is more pleased with them because they follow more rules. And then, often, this attitude turns people away. Is a lost person likely to want to come to know Christ if His representatives act like self-righteous jerks who turn up their noses at those who don't follow the same standards?

"No one knows what we're for, only what we're against when we judge the wounded.
What if we put down our signs, crossed over the lines and loved like you did?"
—"Jesus, Friend of Sinners," Casting Crowns

"But God shows his love for us in that while we were still sinners, Christ died for us."
—Romans 5:8

It's not about rules. It's about the heart.
It's not about works. It's about grace.
It's not about making people conform. It's about showing the love of Christ.
See, we can't follow all the rules. That's the point. It's completely and totally impossible. And the more you try to follow all the rules, the more you overanalyze and beat yourself up for not measuring up, the worse it's going to get. And when you impose those impossible standards on your children, you're very likely to lose them.
Not trying to toot my own horn or plug my book, but I want to share a bit out of Acktorek: The Void, spoilers redacted, of course.

“Emma, no one iss ever worthy of God’s love and care,” he murmurs.

I slowly sit up, pulling my hands away to rest on my knees, as his hand comes to rest on my shoulder. “Were you listening to me?” He has no right to spy on me like that. But . . .

He cocks his head just slightly in a noncommittal gesture. “Emma.” Even through what I guess is a translator like Dad said, he sounds so soft and gentle. So kind. So caring. No one has ever said my name like that before. “God doess not love us because we are worthy. He doess not care for us because we have earned it. He loves us and cares for us because we are created in His image. We are all unworthy—you, me, Carla, Grace, Brian, everyone. You must not believe you are required to prove you are worthy for Him to [Spoiler]. That iss not how this works.”

“I’m not enough. I’ve never been enough for anyone, least of all God.” The words come out hoarse.

“You must cease trying.”

My forehead furrows. If he’s going to go into a stop trying and just do lecture, I’ll smack him.

He pulls me closer and looks me right in the eyes. I still can’t decide if this is okay or extremely uncomfortable, but I can’t pull away. Something in me doesn’t want to.

“I have been trying,” he says. “I am guilty of much. [Spoiler] I feel as if I will never do enough to compensate for the hand I played in all of these things. The truth iss that I will not. I cannot. However, it iss also true that I do not have to compensate for it. I do not have to carry the weight of all my mistakes because Jesus already paid for them. He hass washed away all of the blood that iss upon my hands. I am not adequate, you are not adequate, but He iss. He iss the only One who iss adequate. You were correct that He iss the only One who can [Spoiler] and deliver us from this situation. But His doing so doess not rest upon your worthiness. It doess not rest upon me recompensing my mistakes. The only thing that matters iss that Jesus iss worthy and He hass paid for all of our sins upon the cross. Surrender to Him, Emma. Allow Him to be worthy within you.”

We can't do enough to please God. Ever. That's why we need Jesus. Jesus fulfilled the law for us. He lives in us. We are not enough, but that's okay because Jesus is enough.
That's not to say that everything is permitted. That's not to say that our lives shouldn't be transformed by Christ. By their fruits you shall know them. But it's not about following a set of rules. It's not about the letter of the law. It's about loving the Lord our God with all our heart, soul, mind, and strength, and loving our neighbors as ourselves. It's about how it is no longer we who live, but Christ who lives in us.
Not rules.
But the transformative, unconditional, eternal love of Christ.
Posted by Morgan Huneke at 6:00 AM No comments: