Acktorek: The Void Is Here!

via GIPHY
It's my thing. Deal with it. 😉
Acktorek: The Void is HEEEEERE!!!!!!!!! I'm so excited to finally introduce this book to the world. These characters are my babies and I put them through so much and it's been a long, hard journey to get to know Emma (and get her to not hate me), and now you can meet them properly! 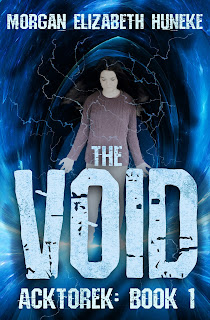 Buy Now!
I've got a small blog tour going on with reviews and author interviews and character interviews and a giveaway, so check it out!
Tour Schedule
Monday, October 26
· Tour Announcement at Morgan Elizabeth Huneke
· Book Review at Living Outside the Lines
· Author Interview at Isamonkey Reviews

Wednesday, October 28
· Book Spotlight at The Music of a Story
· Interview with Mitchell at Living Outside the Lines

Giveaway
Enter to win a signed copy of Acktorek: The Void! Giveaway open to U.S. residents only.
a Rafflecopter giveaway
Posted by Morgan Huneke at 6:00 AM No comments:

Carla's my baby. I want to give her all the hugs. She's a brave and selfless girl, and at almost-thirteen, she's the youngest of the three point of view characters.
She's never known a time when her mom wasn't mental and her dad wasn't emotionally distant. She wouldn't know there ever was a time when things were different if Emma hadn't told her. And Emma herself barely remembers. Emma practically raised Carla, and Carla very much looks up to her older sister. They are quite different when it really comes down to it, but they're very close even so. Emma would do anything for Carla, so even though Emma isn't much into fiction, and especially isn't into speculative fiction, Emma has read Carla numerous L'Engle and Haddix books, in addition to fairy tales when Carla was really little. Those are precious memories to Carla.
Carla loves music. Even though Emma doesn't much care for music herself, she's actually responsible for Carla's love of music. Emma was trying and failing to explain the sunrise to Carla, and remembered she'd just had Grieg's "Morning Mood" in music appreciation at school. She played the song for Carla and that was the moment Carla fell in love with music. She loves playing piano, both Baroque/Classical/Romantic music, and modern songs such as "Let It Go." She is currently learning "Le Petit Noir" by Claude Debussy for a school talent show. But she will always have a soft spot for Grieg.
Carla can be kind of a mess. While Emma's room is sparse and neat, Carla's room is full of stuffed animals and audiobooks and clothes often end up on the floor. She also has a habit of twirling her fingers in her hair if she's concentrating or nervous or just trying to think, which often knots it up.
Carla has been blind since birth. It doesn't really bother her or hold her back—it's just a fact of life. The only thing is, she does feel like it makes Emma worry about her more, and makes things harder for her. Not that Emma wouldn't worry about her if she was sighted. She would. Emma's always done so much for Carla. Carla just wishes she could do more for Emma.
Carla's relationship with Emma is extremely important to her life, but her relationship with God is first. She has a strong, unwavering faith that inspires me. She's so young, but she's selfless and wants to do what's right no matter what the personal consequences are. I want to be like Carla when I grow up.
I love Carla so much and I can't wait for you to meet her properly next week!
Posted by Morgan Huneke at 6:00 AM No comments:

Mitchell Banks is the main guy in Acktorek: The Void, and he is not from our world. (Like my post about Acktorek itself, some of this isn't actually in the book, but just a part of my development of Mitchell's character/backstory.)
He comes originally from a world called Aglion, but he currently resides in the city world of Ebraria, from which the company Acktorek operates.
Mitchell grew up in Aglion with his family: his parents and his older sister Lara who married a teacher named Tucker and had two children, Anise and Jason. Mitchell was very close to his family, and Anise especially is a huge influence in his life. Aglion puts a huge emphasis on academics, and, as they supply Acktorek with some of its greatest scientists, it's a big deal to pass the Acktorek Preparatory Program, as Mitchell did.
At fourteen, Mitchell moved to Ebraria to attend Acktorek Academy, a four-year program that trains future Acktorek agents. Like I said before, it is their main program, but they do have other training programs as well. Mitchell's preference would have been special ops (basically investigating and taking care of weird sciencey things that happen, and all in all being Force-less, lightsaber-less Jedi/Team Flash/The Doctor people, and special ops is the best name I could come up with—though I could have gone with "Daddy" as a kid my sister babysits suggested), but he ended up in breach control. Which is typically a boring go-to-this-world-and-throw-a-neutralizer-into-this-breach-before-it-gets-toxic-or-otherwise-dangerous job. Only that's not how it's turning out.
Mitchell is a kind, compassionate person, who wants to help others. He experiences doubts about his abilities and adequacy. He's very dutiful, but also determined to do what's right, even if it means disobeying a direct order. He's stubborn and determined, but also knows when to back off. He has a soft spot for little girls because they remind him of his niece, Anise. He misses his family like crazy and will never get used to living away from them in a city instead of near them in the countryside. He likes to cook, he doesn't especially like shoes (though that never comes up in the first book), and he often runs his hand through his blond hair making it stick up (it's a similar cut to BBC Arthur and Luke Skywalker). He also speaks several languages and much prefers physics to biology. He's eager to please, but he'd much rather please his Heavenly Father than his superiors at Acktorek. And he has a tendency to get injured and not bother treating the wound until someone makes him. But he will 100% make sure you don't skip any meals.
All in all, he's a great guy who was a LOT easier to develop than Emma, and I hope you like him as much as I do. And I can't wait to write more stories about him. 😊
Posted by Morgan Huneke at 6:00 AM 2 comments:

Technically I did a post about Emma a little over two years ago, but that was before I really got inside her head, so while that post is still mostly accurate, it's rather incomplete. Now to introduce her without giving major spoilers...
Emma is a high school senior with very little personal ambition. She has an interest in science, particularly biochemistry and molecular biology, but she doesn't feel free to pursue her own interests. She never has.
Until Emma was about four, her life was fairly normal. When her mother was pregnant with her younger sister Carla, however, everything changed. Mom went crazy, Dad became distant, and little Emma became largely responsible for bringing up her blind little sister.
Everything about Emma's life revolves around Carla. Emma's goal is to become financially independent as soon as possible so she and Carla can move out of the toxic environment that is their dysfunctional family. She wants to give Carla a stable life. And she doesn't feel that she can do that with Mom talking to people who aren't there and freaking out about nonexistent dangers, and Dad always being checked out emotionally. Carla deserves better than that.
Emma's a loner...with a best friend she can't get rid of. Grace Holland has considered herself to be Emma's best friend since they were four years old, ever since Emma spent lots of time at her house during her mom's pregnancy with Carla. The two girls are vastly different—Grace is happy, bubbly, and loves her fandoms, and Emma is angry, closed off, and thinks most fiction, especially spec fic, is stupid—but for all their differences and for all Grace never ceases to get on Emma's nerves, they still talk to each other every day and always sit together at lunch. Not that Emma has much of a choice in the matter.
Emma has no interest in boys or relationships. She's seen her parents. Sure, they love each other, but their life isn't exactly sunshine and lollipops. She doesn't want to deal with that. Nor does she have the time for a boyfriend. She has to focus on preparing to be on her own and supporting her sister. So does Grace have to keep pushing her to date? And pushing the new boy, Mitchell, on her?
Emma likes for things to make sense. To be under her control. She has a hard time accepting anything that's outside of her carefully constructed idea of how the world works. She's had so little control over the chaos that comes with her life. She has to hold onto what little control she has.
But that may not be possible. 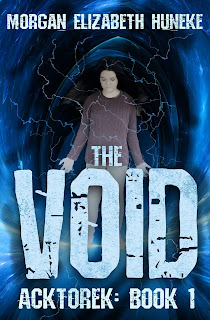 Read an early copy of the book and help spread the word about the upcoming release!
Posted by Morgan Huneke at 6:00 AM 1 comment: