The countdown is on! Just two more weeks from yesterday until Creighton Hill comes out, two more weeks until the blog tour! There will be lots of fun interviews and guest posts, and I'm especially looking forward to the book reviews, to see what my reviewers think of the book.

But I'm not just here to say how excited I am and continue the countdown. No, I've made the prologue and first three chapters of Creighton Hill available for you to read for free! Here's the link to the PDF. Enjoy!

It's cover reveal time again! Half-Blood is a prequel novella to Jaye L. Knight's amazing Ilyon Chronicles. Learn more about beloved character Jace and the hard life he led prior to Resistance. It's an amazing, heart-wrenching story, and I love it. Fans of Ilyon Chronicles, wait anxiously for this book. Those of you who haven't read Ilyon yet, you have to join in with this amazing series. It's the best

Check out the cover of Jaye L. Knight’s upcoming novella, Half-Blood, and learn about this prequel story to Ilyon Chronicles! Make sure you also enter the giveaway at the bottom!

About the Book
The gasps and murmuring grew. Though some were hardly more than whispers, clear words reached Jace’s ears—dangerous, monster, animal, soulless. He tried to back away from their accusing eyes, but the collar pulled hard against his throat and held him in place.
For all his years as a slave, Jace has known nothing but the hatred people hold for his mixed blood—one half human, the other half the blood of a race considered monsters. Always, he is the outsider and quickly learns it is better to keep to himself. But, when his volatile ryrik blood leads him to do the unthinkable, he is thrown into a world of violence and bloodshed.
Forced to become a gladiator, Jace finds more and more of his heart dying as his master works to break down his will not to become the monster everyone believes he is. When a stranger interferes with his master’s harsh punishment, Jace’s world is upended yet again. But with it comes the possibility of hope that has long since died. Could the man possibly hold the key to escaping the hopeless darkness that is Jace’s life? Is there such a thing as life beyond the cruelty of slavery?
See where Jace’s story all began . . . 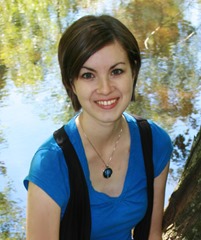 Jaye L. Knight is an award-winning author, homeschool graduate, and shameless tea addict with a passion for Christian fantasy. Armed with an active imagination and love for adventure, Jaye weaves stories of truth, faith, and courage with the message that even in the deepest darkness, God’s love shines as a light to offer hope. She has been penning stories since the age of eight and resides in the Northwoods of Wisconsin.
You can connect with Jaye on her website, blog, Facebook, Google+, and Twitter.

Giveaway
As part of a month long celebration for the one year publication anniversary of Resistance (Ilyon Chronicles - Book 1), Jaye is giving away several fun prizes! Enter for a chance to win using the form below! U.S. entries only please.

*throws confetti* Creighton Hill is available for pre-order on kindle! This is the first book I've released since KDP added the pre-order feature, so it's exciting to be able to offer a book for pre-order for the very first time. So you can go ahead and buy it for only $2.99, and it will be automatically delivered to your kindle on June 8th. How cool is that?

As much as I'd like to offer the same exact thing for the paperback, CreateSpace doesn't work that way, so there can't be any day of deliveries on the paperback. However, I do have a compromise as I went ahead and set up the PayPal button for signed copies and put it on my website this morning. So if you want, you can order your signed copy now, and I will send it to you ASAP when I get my first shipment, which I will order as soon as I click publish on June 8th. 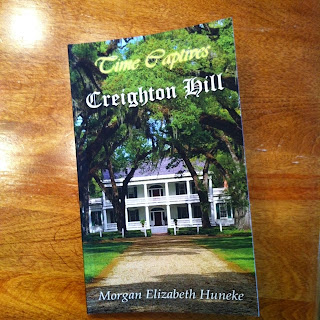 I got my first proof last week! Doesn't it look amazing? I'm not entirely happy with the shade of green underneath the back cover text and the top margins ended up a little too small, so new proof it is, but I'm confident I can get out of this one with less proofs than The Experiment. I love the matte finish on the cover, the cream pages look amazing, and they appear to be using a thinner paper that looks more like that of a traditionally published book, and it's just so super cool to be able to hold it in my hands. It's a real book!
Posted by Morgan Huneke at 9:25 AM 4 comments: 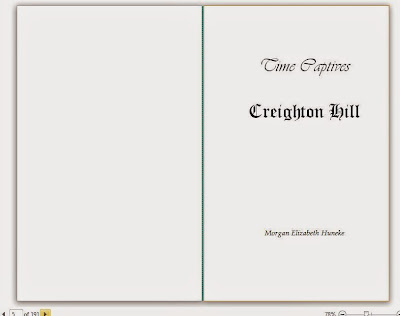 Creighton Hill is starting to look like a real book! This is so super exciting. Let me show you another picture. 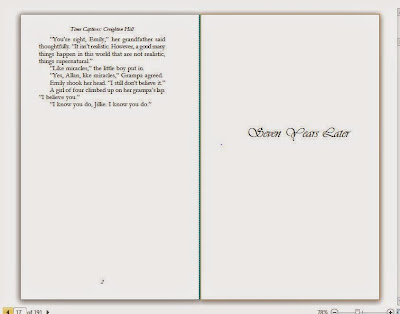 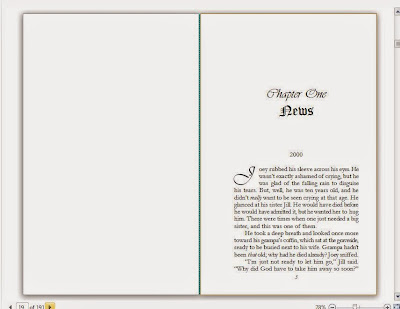 It's so neat. I love those fonts, and how they look together, I'd better, after all the time I spent trying to design it just so. I haven't formatted a book since last fall, so doing it again, and doing all this design was fun. And, sorry, Ashley, it's just more exciting to do one's own book, however much you may love your friend's, so I'm a bit more excited about Creighton Hill than I was Becoming Nikki.

Now, there still will definitely be some changes to the interior, as I have some people still proofreading, and others who I asked last minute to send me some things to put in the book (I don't always procrastinate like that, I just didn't make that final decision until last Friday morning), but I think I'm going to go ahead and order my first proof early on this week. See, it took me four proofs to be mostly satisfied with the cover of The Experiment, so I want to be sure I have plenty of time to get the cover right, and the printing of the map in the interior. I'm doing a matte cover for the first time (they added the feature after I did my last book) and I'm doing cream pages instead of stark white, so it'll all be a bit different. And I'm anxious to see how those differences look. Not that I haven't seen those printing choices in friends' books but it's different in your own. Plus, I'm really anxious to hold this book in my hands. I want to be able to hold a tangible book, not my kindle or a manuscript printed on printer paper. But I'll still be able to edit it for awhile (not edit it for Swahili, as autocorrect insisted on texting my friend), so all the changes should get in there. And I'm hoping to have it available for preorder on kindle by next week. That's another new feature I'm super excited about.

And the blog tour is still exciting me. I've written up three guest posts on various interesting topics, two character spotlights on characters whose identity I will not yet divulge, and I received some character interview questions this morning that I'm looking forward to answering. Plus, I know at least one of my reviewers really enjoyed Creighton Hill, and really wanted book two. I love getting that response. :)

Just four weeks to go! A lot will happen in those next four weeks, both in the publishing process and in my personal life, so I'm hanging in for a wild ride.

Beta readers are so absolutely necessary. I've been blessed to find some very good ones. I always have my family read my books before they go outside the family. I know there are some people who don't have their family read their books until they are published, but I kind of take it for granted that my family will read my stuff. Without them, my books would really be a mess. They have helped me fix so many big things, or told me the book just needs an entire rewrite (The Crossways). But even my family doesn't catch everything. I chalk it up to the fact that they've been hearing me talk about the book for years, and so they know almost everything there is to know about the stories. My beta readers, however, are seeing it with fresh eyes. Which means they catch things.

One noticed that Emily referenced something she wouldn't find out about for several chapters. Oops. Two pointed out that Joey thought about how he had one nice sister when he gets along with two out of his three sisters. Still another pointed out that taking a certain sentence literally created an odd mental picture. And she compared it to saying "Her eyes floated to the ceiling." She told me that in a text which I received while I was cooking. So I'm mixing together baked beans and thinking of floating eyeballs. That was...interesting. And there was the fact that watching mostly BBC shows for the past year and several months kind of rubbed off on me, which meant some of my American characters, um, sounded British. After a beta reader pointed that out, which was something my sister had been onto me for, I found some more American alternatives.

All these things just serve to make it just that much better. And my proofreaders will help me polish it up to perfection. Well, as close to perfection as humans can make it. And then my blogger friends will help me tell everyone all about it. Speaking of which, I'm planning on sending out the tentative blog tour schedule this morning. If you don't get an email by about noon, but you thought you signed up, or you meant to sign up but forgot (I've done that, sorry), it's not too late. Just shoot me an email and/or go ahead and fill out the form (it's still on the "Creighton Hill Blog Tour" tab) and I'll still work you in. Though it is possible that this is a scheduled post actually written the last day of April, and some life thing happened to prevent my actually sending the email as planned. I hope not. That would be bad. But I'm getting excited about my first blog tour. It's going to be super awesome because I have super awesome bloggers involved, so it can't help but be so. :)

I also have a brand new Creighton Hill trailer to share with you. Enjoy!

And in other news, Across the Stars is now available to be borrowed through Amazon's Kindle Unlimited program. So if you have Kindle Unlimited, you can read it for free!
Posted by Morgan Huneke at 6:00 AM 3 comments: