A Visit to the Creation Museum

Before I get started, I'm starting an email list for special announcements and quarterly newsletters, which will begin in July if I can get it all prepared by then. Use the form in the sidebar or hop over to the "Contact" page to sign up.

The week of Memorial Day, my family visited the Creation Museum. It is owned by Answers in Genesis, a ministry founded by Ken Ham. Having read a lot of Answers in Genesis books plus other Creation science books for school and just because they're awesome, I knew a lot of what the museum taught, but it's so much more amazing to see it in front of your eyes. They take you through the first 11 chapters of Genesis, showing you the story, showing how it is backed up by archaeology and geology, and answering common and not-so-common questions.

The mysteries of Creation are so vast and wonderful. I love it. They have two planetarium shows as well, one about aliens (fact or fiction?) and one on the Created Cosmos. The Created Cosmos one just blew my mind. How anyone can believe all of this vast, amazing, intricate universe came about by accident is beyond me. This place is so highly recommended. Pictures once more courtesy of my mom and sisters. Scripture quotations are from the ESV. 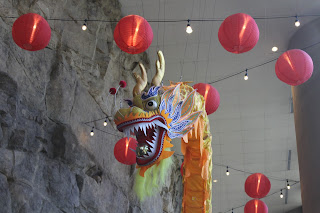 In the lobby, they have displays talking about dragon legends from around the world, and how they were probably because of dinosaurs. This is some of my favorite stuff, people. I was so excited. 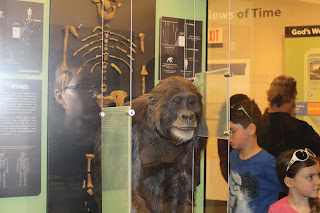 The "Lucy" display. Showing how evidence suggests she is really just an extinct version of the gorilla. On the back side, they have a display showing how different skin tones, eyes, and hair patterns can make this exact facial structure look more like a gorilla or more like a human. 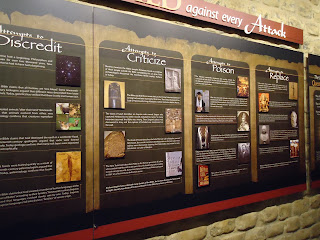 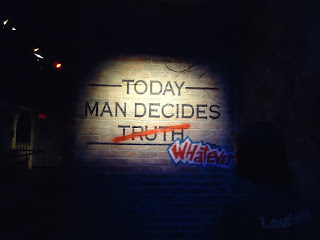 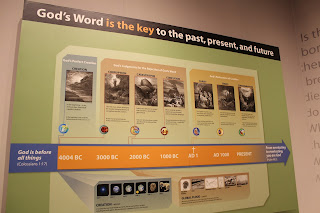 The true key to the past. 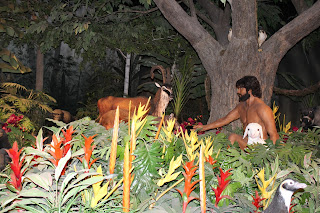 And the LORD God planted a garden in Eden, in the east, and there he put the man whom he had formed. 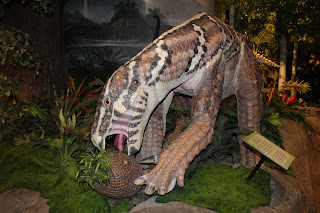 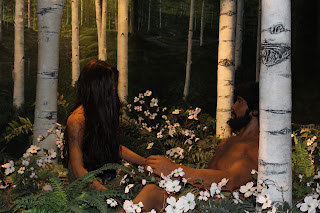 Then the LORD God said, “It is not good that the man should be alone; I will make him a helper fit for him."....And the rib that the LORD God had taken from the man he made into a woman and brought her to the man....Therefore a man shall leave his father and his mother and hold fast to his wife, and they shall become one flesh. And the man and his wife were both naked and were not ashamed. 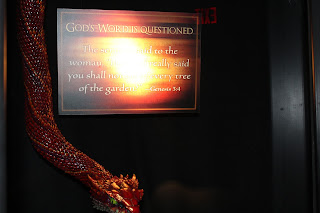 Now the serpent was more crafty than any other beast of the field that the LORD God had made. He said to the woman, “Did God actually say, ‘You shall not eat of any tree in the garden’?” 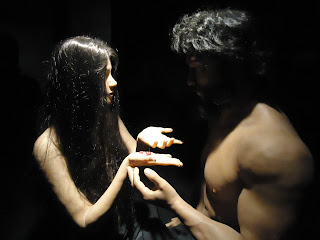 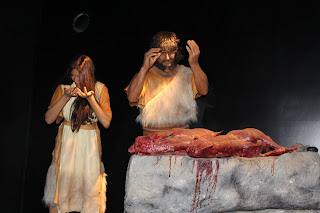 And the LORD God made for Adam and for his wife garments of skins and clothed them. Then the LORD God said, “Behold, the man has become like one of us in knowing good and evil. Now, lest he reach out his hand and take also of the tree of life and eat, and live forever—” therefore the LORD God sent him out from the garden of Eden to work the ground from which he was taken. He drove out the man, and at the east of the garden of Eden he placed the cherubim and a flaming sword that turned every way to guard the way to the tree of life. 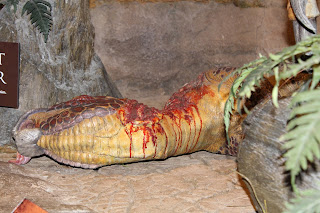 With sin came death for all creatures. 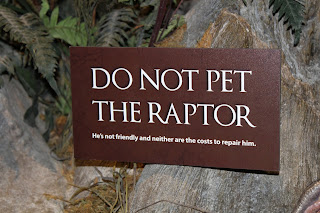 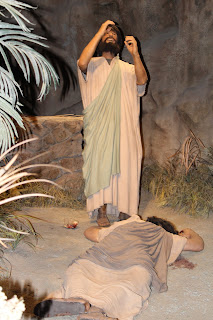 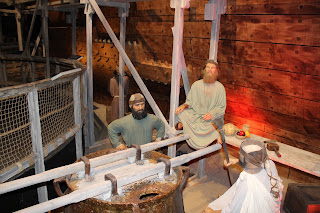 And God saw the earth, and behold, it was corrupt, for all flesh had corrupted their way on the earth. And God said to Noah,“I have determined to make an end of all flesh, for the earth is filled with violence through them. Behold, I will destroy them with the earth. Make yourself an ark of gopher wood. Make rooms in the ark, and cover it inside and out with pitch. 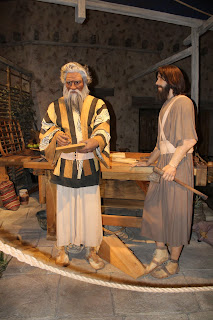 For behold, I will bring a flood of waters upon the earth to destroy all flesh in which is the breath of life under heaven. Everything that is on the earth shall die. But I will establish my covenant with you, and you shall come into the ark, you, your sons, your wife, and your sons’ wives with you. And of every living thing of all flesh, you shall bring two of every sort into the ark to keep them alive with you. They shall be male and female. 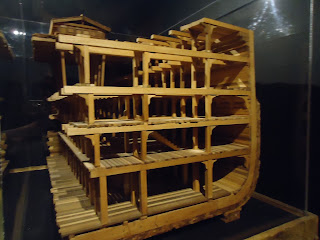 The full scale replica of the Ark is scheduled to open July 7. 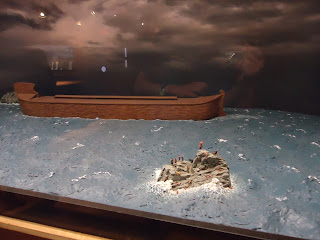 The waters prevailed above the mountains, covering them fifteen cubits deep. And all flesh died that moved on the earth, birds, livestock, beasts, all swarming creatures that swarm on the earth, and all mankind. Everything on the dry land in whose nostrils was the breath of life died. He blotted out every living thing that was on the face of the ground, man and animals and creeping things and birds of the heavens. They were blotted out from the earth. Only Noah was left, and those who were with him in the ark. 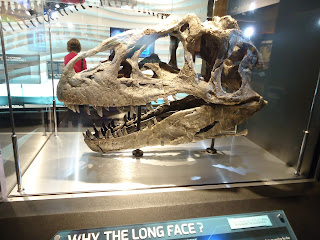 This is an actual dinosaur fossil. 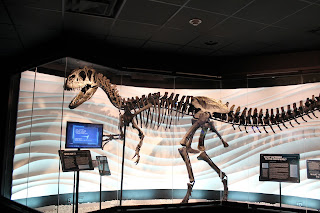 This is its body, with a fake head, since the real one is too heavy. It's fairly complete, comparatively speaking, but still many of the bones are not real fossils. 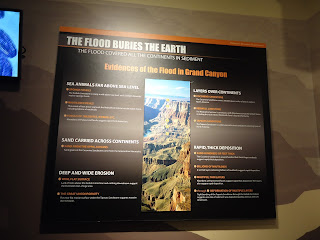 Somehow we don't have any pictures of the stuff on Babel? 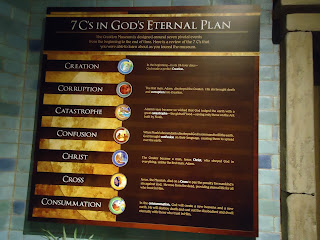 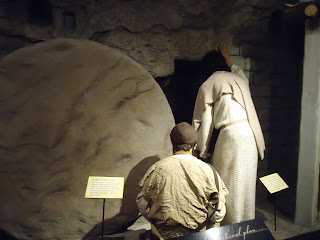 Because none of this means anything if it doesn't point you to Christ and the Cross, the eternal salvation God offers as a free gift through Christ Jesus, our Lord. 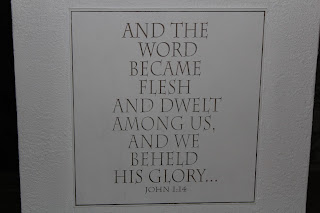 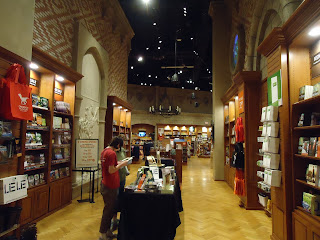 Our least favorite thing about the Creation Museum...we don't have enough money to buy everything in the gift shop. 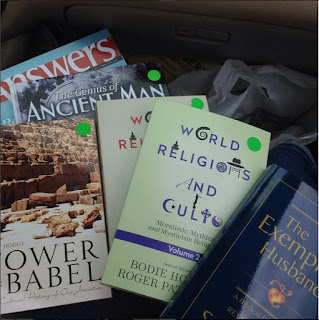 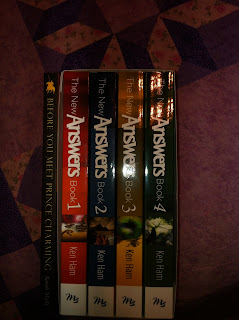 The Creation Museum was truly an amazing experience. If you ever get the chance, you must visit. It is well worth it.
Posted by Morgan Huneke at 6:00 AM