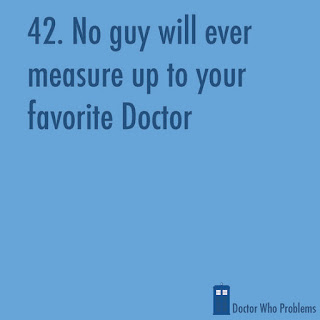 I came across this meme or one like it quite some time ago. I laughed at it as a Whovian joke and moved on, but somehow I couldn't forget it. It stuck in my head, bothering me. My first train of thought went something like this:

I like the Doctor an awful lot as a character, but I wouldn't want to marry someone like him. I want someone better. Someone who's a Christian, first of all. Someone who would protect me as the Doctor does his companions, yes, but someone who isn't so emotionally damaged by the horrible things he's done in his past and still struggling with hatred towards his enemy. Someone who will help me grow closer to God, not get my head all wrapped up in exciting death-defying adventures. Because while the Doctor's on the whole a good guy and a hero, he does have some serious issues. Besides, he's fictional.

Recently, though, I've started realizing that this is an even bigger problem. It's not isolated to the Doctor Who fandom. It's pretty much any and every fandom. For instance, there are numerous pins about how Percy Jackson sets the bar pretty high for the "perfect boyfriend." And fangirls everywhere are always going on about how they have a crush on such and such character or such and such actor. I don't get it. And it's not even healthy.

Because, girl, you're probably never going to meet that actor. And that character? He's not even real.

I'm not saying I don't ever get too invested in fandoms because I do. I've been too into Narnia, Star Wars, Doctor Who, even Little House. But at the end of the day, I still keep in mind that it's not real. As much as I like Jace from Ilyon Chronicles, I don't wish he was real so I could marry him. He's not right for me, he's right for Kyrin. I don't want Percy Jackson as a boyfriend, he's Annabeth's and he's too immature for me anyway. Steve Rogers is an upright and honorable guy and I love that, but he's a fictional character. Captain America is never actually going to come save me.

I'm not pointing fingers at anybody; this is mostly just going off of what I see when I search a fandom on Pinterest. While it's fun to fangirl about awesome stories and great characters, you've got to be careful. Because it's not real. It's not okay to obsess about a story (something I had to learn the hard way), and it's not really okay to crush on actors or fictional characters either. Don't go imagining your life with someone you've never met and likely will never meet. They're probably nothing like what you think they're like anyway. Most actors are liberals and very few are Christians. And your favorite fictional character? He's fictional. The author can make him do whatever he or she wants him to do, and outside of the written story, you can do the same thing. Real people aren't like that. And by setting up your idea of this awesome actor or this awesome character as the standard for a boyfriend or even husband, you're doing nothing but creating problems for yourself. Just like Anne Shirley...she fell for Roy Gardner when Gilbert Blythe was right in front of her the whole time, simply because Gil didn't fit her fictional ideal of Prince Charming.