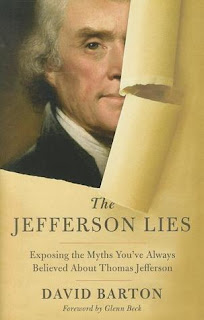 America, in so many ways, has forgotten. Its roots, its purpose, its identity―all have become shrouded behind a veil of political correctness bent on twisting the nation's founding, and its founders, to fit within a misshapen modern world.

The time has come to remember again.

In "The Jefferson Lies," prominent historian David Barton sets out to correct the distorted image of a once-beloved founding father, Thomas Jefferson. To do so, Barton tackles seven myths head-on, including:

Did Thomas Jefferson really have a child by his young slave girl, Sally Hemings? Did he write his own Bible, excluding the parts of Christianity with which he disagreed? Was he a racist who opposed civil rights and equality for black Americans? Did he, in his pursuit of separation of church and state, advocate the secularizing public life?

Through Jefferson's own words and the eyewitness testimony of contemporaries, Barton repaints a portrait of the man from Monticello as a visionary, an innovator, a man who revered Jesus, a classical Renaissance man―and a man whose pioneering stand for liberty and God-given inalienable rights fostered a better world for this nation and its posterity. For America, the time to remember these truths again is now.

Every American should read this book. Carefully researched and loaded with notes and citations so you can seek out the source documents for yourself, this is an excellent book debunking the lies so many people believe about Thomas Jefferson.

Did you know that most of what we believe about Jefferson these days comes from blatant lies fabricated by his enemies in the unbelievably nasty presidential campaign of 1800?

Did you know that the initial report "proving" that Sally Hemmings had children by Jefferson (a story with its roots in the aforementioned nasty campaign) was retracted just weeks later because it was false? Or that the line most strongly believed by oral tradition to be fathered by Jefferson has no Jefferson DNA whatsoever?

Did you know that there is no such thing as a "Jefferson Bible" and that the closest you can come to such a thing is essentially a Bible tract Jefferson wrote for the Indians and a topical compilation of Jesus' teachings for his own personal study?

Did you know that the phrase "a wall of separation between church and state," which does not come from the Constitution but from Jefferson's letter to the Danbury Baptist Association, was a commonly used phrase that meant the government could not interfere in the church, not that religious activity was to be excluded from the government? And that Jefferson had no say in the writing of the Constitution because he was in Europe at the time?

Did you know that Jefferson fought mightily for emancipation and only held slaves himself because he inherited them and Virginia law made it increasingly more impossible to free them?

Did you know that the university Jefferson founded was not secular, but, in fact, trans-denominational?

Did you know that the only clergy Jefferson despised were the ones who defamed his character from the pulpit and he had many friends who were clergymen?

Did you know that though later in life Jefferson subscribed to the teachings of the Primitivists that swept Charlottesville (a sect that, in trying to return to the fundamentals of Christianity, deemphasized anything other than the Gospels and rejected some orthodox Christian beliefs because the term used to describe such doctrines was not used in the Bible or because they hated John Calvin so much that any belief to which he subscribed was automatically false), he never once stopped considering himself a Christian who believed in a personal God?

Read this book. Destroy the revisionist history with the truth.
Posted by Morgan Huneke at 6:00 AM