We're launching Carrie Mouse and the Giant Garage in just one week! I'm so excited about this! We've put a lot of work into this book, a lot of figuring things out as we go along, and we're finally done! So for fun, I'm going to give you a list of random facts about the background of this book. 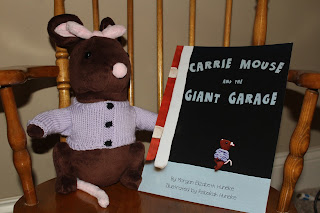 P.S. If you want to help with the blog tour, I can still fit you in. Sign up here.
Posted by Morgan Huneke at 6:00 AM