I wasn't really sure if I could write this post. See, Fawkes is an amazing book. It really is. But I finished it in the middle of the night, the night before we put my beloved dog down. When I finished the book, I heard her crying and went to sit with her for a while.

Fawkes was amazing. It's a fabulous book. I loved the book. But it'll probably always be bittersweet because it'll remind me of having to say goodbye to Sophie. 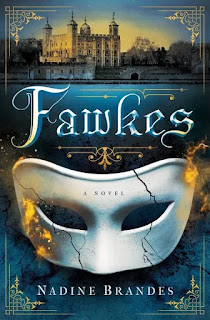 Thomas Fawkes is turning to stone, and the only cure to the Stone Plague is to join his father’s plot to assassinate the king of England.

Silent wars leave the most carnage. The wars that are never declared, but are carried out in dark alleys with masks and hidden knives. Wars where color power alters the natural rhythm of 17th century London. And when the king calls for peace, no one listens until he finally calls for death.

But what if death finds him first?

Keepers think the Igniters caused the plague. Igniters think the Keepers did it. But all Thomas knows is that the Stone Plague infecting his eye is spreading. And if he doesn’t do something soon, he’ll be a lifeless statue. So when his Keeper father, Guy Fawkes, invites him to join the Gunpowder Plot—claiming it will put an end to the plague—Thomas is in.

The plan: use 36 barrels of gunpowder to blow up the Igniter King.

The problem: Doing so will destroy the family of the girl Thomas loves. But backing out of the plot will send his father and the other plotters to the gallows. To save one, Thomas will lose the other.

I got this book for Christmas. I was excited to read it, but I made myself finish my library books first. I wish I'd finished them sooner, for multiple reasons.

The cover is gorgeous. I keep looking at it. Still haven't put it on the shelf, even though I made room for it. It's just so pretty, and actually says so much about the book.

It took me a little while to truly get into the book because you're thrust into this alternate fantasy version of early 17th century England with little explanation of how the world works. Which makes sense, since it's the only world the characters know. Basically, it took me a little while to get my bearings on the color power thing, which is an important element of the novel. Once I figured that out, it was great.

It's a very interesting take on the Gunpowder Plot and the plague. Rather than the bubonic plague, this plague turns people into stone. Thomas's left eye is stone from the beginning of the story, and he is desperate for color power because he believes that with it, he will be able to cure his plague. But when his father, Guy Fawkes, refuses to bring him his color mask so he can bond with a color, Thomas sets out for London to find him, and gets wrapped up in the Gunpowder Plot. But instead of it being a plot by Catholics to assassinate a Protestant king and blow up Parliament, it's a plot by Keepers to assassinate an Igniter king and blow up Parliament.

Essentially, in this book, it's all over the beliefs on White Light. White Light is where all color power originates. Igniters want to use White Light and command multiple colors—to the minds of the Keepers, making them power hungry. The Keepers don't talk to White Light, believing that it's wrong to use it, and you should keep to a single color. And the color power, well, once you've bonded with a color, using your color mask, you can speak to the color and get whatever is that color to do things. For instance, if your color is brown, you can use color speak to move dirt. But you have to be wearing your mask to do it. The Keepers are being hunted down and executed, the Igniters thinking they're responsible for the plague. Keepers believe Igniters are responsible and think that it can be stopped by putting a Keeper on the throne.

Aside from the fantasy elements, that Thomas exists in history as only a single birth record, and that Emma Arebor is entirely fictional, Nadine kept to the facts on the Gunpowder Plot. The conspirators were real, the plot and how they were executing it (minus color power) was based in reality, the anonymous tip was real, the ends of the conspirators were real. I'm just glad Thomas and Emma weren't actually real (besides the one birth record) so they had a chance of surviving. And this book inspired me to learn more about the real Gunpowder Plot.

What I really loved was Thomas's journey. He was raised strictly Keeper, and with his father in his ear, he kept being convinced that the Keeper way was right. Except then there was Emma. An Igniter with her own secrets. But someone who actually understood White Light for what it was. How no one commands White Light, you can only ask. And she doesn't say "Thomas, ignore what your father says. I'm right." She encourages him to look beyond everything he's ever heard about Keepers and Igniters and White Light and seek the truth. To find what's real for himself.

It's a very important journey, finding truth for one's self. Learning to do what's really right, whether or not it's what you've been told is right. You can't stand up for your beliefs if you don't know deep down inside for a surety that they are true. And when your father is a conspirator plotting mass murder, you probably need to question his motives and beliefs. :P

And I really just loved Thomas and Emma. They're both great characters and my time with them was too short. I love their friendship/relationship, how sweet and innocent it was. It was beautiful.

I love this book. It's the best of the year so far.
Posted by Morgan Huneke at 6:00 AM