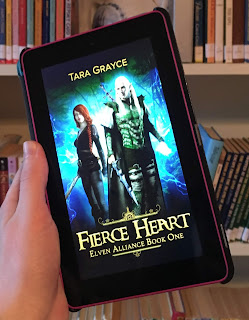 Essie would do anything for her kingdom…even marry an elf prince she just met that morning.

The human kingdom of Escarland and the elven kingdom of Tarenhiel have existed in an uneasy peace after their last wars ended with both kings dead. As tensions rise once again, desperate diplomacy might be the only way to avert war. If only negotiations between elves and humans were that simple.

When a diplomatic meeting goes horribly wrong, Essie, a human princess, finds herself married to the elf prince and warrior Laesornysh. Fitting in to the serene, quiet elf culture might be a little difficult for this talkative princess, but she’s determined to make it work.

With impending war and tenuous alliances, it will be up to Essie to unite her two peoples. And maybe get her hands on elven conditioner while she’s at it.

Oh, goodness, where do I even start? I heard about this one back at Realm Makers (it wasn't out yet), and thought it sounded like it would be interesting and wanted to read it, but boy, I had no idea how much I'd fall in love with this book. To the point where I stayed up until 2 in the morning because I just had to finish it and was rereading bits the next day honestly just wanting to reread the entire thing...but really wanting the next book in the series which isn't fully written yet.

Essie and Farrendel. They could not be more different. She's happy and talkative and oh so determined to do right by the people she loves...and determined to love her brand new elf husband who she just met. Farrendel Laesornysh is quiet and reserved and closed off, battle scarred, emotionally scarred by the things he's been through as well as things about him he has no control over...things Essie doesn't let define him, but he does. And, oh, yeah, she's a human princess and he's an elf prince and they just met, but they're getting married to achieve peace between their nations. Even though both of them have overprotective older siblings who are afraid this situation will only end by hurting their baby brother/sister.

I just love Essie and Farrendel so much. The way their relationship develops as they get to know each other, the way Essie's just so positive and determined, the way Farrendel comes to lean on her...it's just so...I don't know if I want to say beautiful because Farrendel has a lot of pain to deal with, but it's beauty coming out of brokenness.

And it's funny. All the stuff about elven shampoo and conditioner. XD I want some. And just Essie's personality and the way she interacts with elven culture is amusing.

Plus danger and action. Troll attacks and near deadly wounds and elf magic and I really can't wait for book 2.

And I'm trying really hard not to give major plot spoilers, so I don't know what else I can say except go read it. Go read it now. Steampunk fantasy romance. With awesome characters and a great story about how love is a choice, and go read it. You won't regret it.

Note: It's marketed as adult, but it's pretty clean, so I'd be fine handing it to an older teen.
Posted by Morgan Huneke at 6:00 AM