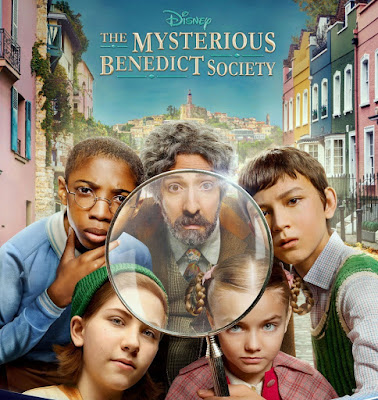 The Mysterious Benedict Society season one is complete!
I first read the book years ago and loved it, then listened to it this year to refresh my memory in preparation for the show. I can't say the details of the book are completely ingrained in my head—twice isn't quite enough for that—but still, it's a book I love and I was anxious to see a well done adaptation.
There will be two parts to this review: Spoiler Free and Spoiler Filled (where I'll mostly be talking about specific changes from the book and how I felt about them. Don't worry, I'll give a warning before I head into spoiler territory.
First, what it's about, for those of you who may not know.

After winning a scholarship competition, four gifted orphans are recruited by the peculiar Mr. Benedict for a dangerous mission to save the world from a global crisis known as The Emergency. Reynie, Sticky, Kate, and Constance must infiltrate the mysterious L.I.V.E. Institute to discover the truth behind the crisis. When the headmaster, the sophisticated Dr. Curtain, appears to be behind this worldwide panic, the kids of the Mysterious Benedict Society must devise a plan to defeat him.