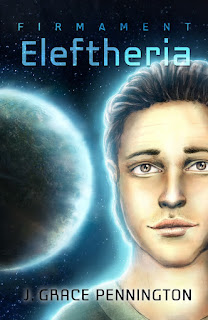 They're finally going back.
Several months after the discovery of Kainus Ge, the Surveyor's crew has a new mission – to gather more information about the planet and try to negotiate a treaty with its ruler. Andi is excited at the prospect of seeing Elasson again, but the arrival of a legalistic attorney on the ship threatens to once again turn her way of life upside down.
How has Elasson fared on the treacherous desert planet in their absence? Can the crew find a way to help the people of Kainus Ge, or will their presence throw the civilization into chaos? And with loved ones absent and rules and regulations forcing unwanted change on her home, how can Andi find her place in the world?
*********************************
*cue the fangirl squealing*
Seriously, though, I'm not sure how I can make it through this review without dissolving into a puddle of fangirly happiness and totally spoiling the whole book.
Ahem.
Y'all.
I waited almost nine years for this book and IT WAS WORTH EVERY SECOND. See, I got book 2, In His Image, for Christmas in 2013 and proceeded to devour it, fall in love with Elasson (who I still 100% ship with Andi), and proceed to pester Grace for, well, the next nearly nine years about when I was going to see Elasson again and by the way, is my ship canon? Well, I still don't know if my ship is canon though there were moments that (okay, maaaaaaybe I'm just seeing what I want to see, but I don't think so) had my sister and me squealing and speculating. Even though Andi's still super annoyed with the Captain not so subtly trying to set her up—
Aaaanyway, trying to not be spoilery but ELASSON IS BAAAAAACK. Or rather, the crew of the Surveyor gets to go back to Kainus Ge and see Elasson again. *big cheesy grin*
Why is it so hard to not spoil the whole thing?
It's just SO GOOD.
But it's not all sunshine and roses getting to go back to Kainus Ge. A legalistic attorney is pointing out all the violations that are just a normal way of life on the Surveyor—like Andi working in medbay with the Doctor—and that's just the beginning. Helping the people of Kainus Ge with Basilius, Elasson's brother, being just as unfriendly as ever while not violating the rules and causing total upheaval to their way of life is hard enough...and then things go crazy and I had so many emotions, from anger to shock to elation to, well, fangirl squealing...
And oh, why are the things I love the most about this book spoilers?
I love seeing my Firmament family again, I LOVED revisiting Kainus Ge, I loved the roller coaster of emotions I went on as I read it in a matter of hours, and after this one, I am beyond excited for upcoming books.
I really cannot express how much I loved this book, though if I admit that at 26 years old, thinking about certain elements of the story make me squeal and actually literally jump up and down, that might give you something of an idea.
Go read the Firmament series. I know I've said that many times over. But really, truly, I love it so much and I want y'all to experience the awesomeness too.
And we got to see Elasson again!
Posted by Morgan Huneke at 6:00 AM