So I promised two tag posts this week. Here's the second one.

I was tagged by Jaye L. Knight for the Favorite Screen Characters tag. As hard as it is to choose just ten, I still have to do it, because how could I not? Permission to talk about my favorite TV show and movie characters? Of course! So here they are.

The Doctor ~ Doctor Who 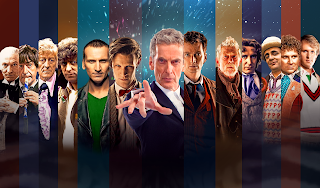 There was absolutely no doubt the Doctor would be on this list. Who doesn't like a several hundred year old alien who travels through time and space in a blue box and saves the universe with a screwdriver? My favorite is Ten, because he's just awesome, but I love the Doctor no matter which one he is. To quote the Brigadier, "He can wear whatever face he likes." He's a hero. He's funny. He can sometimes be kind of rude. He's clever. He's tortured by his past, specifically the Time War. He loves adventure. He saves people on a regular basis. He's the Doctor. King Arthur, the Once and Future King. King Arthur stories never really interested me much, but after catching up with Netflix on Doctor Who and Sherlock, we decided to try Merlin. Oh, my goodness, I love it, and Arthur is my favorite character. He has a tremendous character arc. He goes from being a spoiled brat to being the best king Camelot could have. He can still be sort of thoughtless, but he proves time and time again that he would give his life for anyone in the kingdom, particularly Gwen and even Merlin. I do enjoy his relationship with Merlin. They're like brothers who pick on each other all the time, but are really loyal to each other when it comes to the point. Only with one exception. Arthur has the authority to make Merlin do his work. :) Arthur's a great character, and just look at his faces. They crack me up. Now, I could do an entire top ten list entirely on Doctor Who characters, but I've whittled it down to just the Doctor and Rose. Rose is my first companion and will always be my favorite. Funny, since I didn't think I'd like her at all at first. She's just an average nineteen year old girl, lives with her widowed mom (she's Jackie Tyler, not what you'd think of as a widow), doesn't get the "don't wander off" thing, works in a shop...and then the autons attack London and the Doctor barges into her life. And Rose shows herself to be just as brave and adventurous as he is. She's kind and wants to help people, even when they're daleks, and, though it takes regeneration to get her to fully realize it, she loves the Doctor and is just as devoted to him as he is to her. They're just so happy together. Now excuse me while I go cry over "Doomsday." Peeta Mellark. The boy with the bread. The nicest character in The Hunger Games Trilogy. He's kind. He sees the best in people. He loves Katniss unconditionally. He would give his life for her. He's not a warrior, but that doesn't mean he's not brave. It doesn't mean he wouldn't fight for those he loves. Because he will. He won't fight just to fight. He won't kill just to kill. He's better than that. He'll do the right thing. And, yeah, he does know how to play a crowd. He can get them riled. He knows how to get sponsors to sympathize. Yet, at the same time, he's so genuine. Nothing in the way he acts towards Katniss is an act. Hers may be an act, but his isn't. And he's so...Peeta. And I hate what happens to him in Mockingjay. But still, the old Peeta, the boy with the bread, is in there, fighting to get back. Sorry Flynn Ryder lovers, I like Kristoff better. I like Flynn, but, um, Kristoff is way awesomer. He's an all round great guy. He's brave. He fought off wolves, journeyed to the north mountain, faced a snow monster, ran back through a blizzard to get to Anna. He's honest and sensible. He's not afraid to tell Anna it wasn't a smart idea to get herself engaged to someone she just met that day, but he respects her engagement all the same. When the trolls tease him about her, he even brings up that she's engaged to someone else. He helps Anna search for Elsa, even though she is going without a plan and without any clue as to what she's doing. He lets her do her thing, but is there to help when she fails. Like when he caught her as she jumped off the cliff. He's kind of awkward, but in an adorable sort of way. He doesn't lose his head in emergencies, but knows just what to do. And then at the end, he even asked permission before kissing Anna. (Now, I personally believe in saving one's first kiss for one's wedding, but he asked! How many times do Disney princes do that?) And here's a pin with all sorts of reasons why Kristoff is the best. He is. Because he's Kristoff. It's super difficult to choose between Anna and Rapunzel for my favorite Disney princess, and maybe I should have talked about Rapunzel since I just talked about Kristoff, but I'm sticking with a Frozen theme. And perhaps I like Anna a teensy bit better than Rapunzel, if only because of the sister theme, since, while Frozen isn't the first Disney movie to feature a sibling relationship, it is one of the few. And, despite being the less outgoing older sister, I feel like I can relate to Anna in a lot of ways. We have quirky personalities, can be very stubborn and determined, love chocolate, don't usually think before speaking or acting, sing a lot, have reddish hair, and our relationship with our sister(s) is extremely important to us. I would never agree to marry a man I just met that day, though. I'm not that much like Anna. Though, you know, "what if I meet the one?" "For the first time in forever, nothing's in my way!" Sam Gamgee ~ The Lord of the Rings "I'm glad you're with me, Sam, here at the end of all things." No one is a braver, more loyal friend than Samwise Gamgee. He is, without a doubt, my favorite LOTR character. Frodo never could have gotten to Mount Doom without Sam. Sam was there from the very beginning, helping out in any way he could, keeping the quest going, despite his longings for home, discerning right from wrong, determining who was a help and who would only betray them (um, Gollum), encouraging Frodo when things got hard, putting aside his own despair when it appeared Frodo had been killed and continuing towards Mount Doom with the Ring, carrying Frodo towards their destination when he could no longer walk himself. "I want to hear more about Sam. Frodo wouldn't have gotten very far without Sam." Because he's Samwise the Brave. "Won't you please...call me Cordelia?" Anne is another one of those characters I love because I can relate to her. We're always making stupid mistakes because we live in our imaginations, we're always imagining things (while I never created a Haunted Wood, I have scared myself with my imagination), we like to imagine we have different names, write stories, we have tempers to struggle with, friendship is extremely important. The orphan aspect of her story just appeals to me because of a long fascination with orphans due to Annie. I like Anne mostly from the books, but Megan Follows did an excellent job portraying her. And it wasn't her fault the second and particularly third movies just aren't really that good. I blame that on the writers. So, it wasn't too long ago that I actually got interested in Marvel superheroes, but I quickly came to love Captain America. (I had loved the Bill Bixby/Lou Ferigno version of the Hulk before, but that's a little different.) Cap is honorable. He's a true hero. He wants to defend his country, but he'll do the right thing, even if it means disobeying orders. He's loyal to his friends. He's got some great comebacks, too. And, hey, he even got Thor's hammer to wiggle. He didn't go through with actually picking it up, but what does that say about him? And I feel sorry for him for losing Peggy. It's so sad. Cap's just such a great guy. And even though I love Hawkeye very much, Captain America is my favorite Avenger. I can't wait to see more of him in Captain America: Civil War. Him and Bucky. They have to fix Bucky. Cap needs his honorary brother back. Lucy Pevensie ~ The Chronicles of Narnia This post couldn't possibly be complete without someone from Narnia. It was a bit difficult to choose, but I decided (obviously) to go with Lucy Pevensie. I love Lucy because of her faithfulness. No one believes in Aslan so firmly and steadfastly no matter what as Lucy. She's a great inspiration. And yet, unlike Elsie Dinsmore, she's also very human. She makes mistakes (maybe more in the books than in the movies, but it's still Lucy). She's kind and loves to help people. She's friendly. She's brave. If she were any braver, she would be a lioness. She's a good queen, a good sister, and a good friend. And Georgie Henley does a fantastic job of portraying her. Despite the flaws in the dialogue writing in Dawn Treader, she's still the perfect Lucy.


So that's a top ten. I can't say the top ten definitively, because there are so many others, these are just the ones I chose to share. So many great characters! I kind of noticed a theme, though: girls I can relate to and guys who are honorable heroes. I wonder what that says about me?

And for those who I tag to share your top ten favorites: Katelyn, Moriah, Savannah, Destiny, Brianna, Ashley, Kendra, Maddy, Melani, Faith

So this is your permission to rave about your favorite screen characters. :) You don't have to if you don't want to, but trust me, it's fun. (Unless your internet is tied up with uploading a YouTube video when you're trying to search Pinterest for pictures of said characters. Then it's a little frustrating.)

If you're not tagged or don't have a blog, what are some of your favorite screen characters? Which of mine do you like?

*All pictures come from Pinterest
Posted by Morgan Huneke at 6:00 AM