Briznom, the land of Vannie's birth, a land of varied regions from the rolling hills to the deep forest to the beautiful coastline. A land mired in politics and corruption...Oh wait. That's not something they would want advertised. 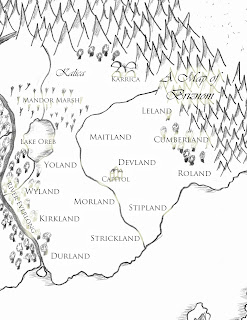 Briznom is divided into twelve vassalages: Wyland, Yoland, Maitland, Leland, Kirkland, Morland, Devland, Cumberland, Durland, Strickland, Stipland, and Roland. Each one is its own sort of district, ruled by a vassal lord. Each vassal lord can set some rules for his own vassalage, but his primary role is as a member of Court. The vassal lords meet regularly in the Capitol. They conduct business similarly to Congress, but on a much smaller scale, and since they don't have a bicameral legislature, legislation only has to pass through one vote. Not exactly the best for preventing bad bills, but that's how it goes. The king's role is far more similar to that of a president than that of a traditional king. He also presides over Court.

The Briznomian Court passes laws, but they also have other duties. They also fill the role of the judicial branch and that of lesser courts, passing judgement on criminals. So essentially, they're both judge and jury, as well as being the legislature. It's no wonder their system became so corrupt. Division of power exists for a reason.


To secure the position, the eldest child of every vassal lord is betrothed when a child, girls in infancy, boys between ages 3 and 5. These betrothals are final, and it is unheard-of for them to be broken. Usually, heirs are betrothed to a distant cousin. In spite of the requirement of arranged marriages for heirs to the vassalage, it is extremely rare for any others in the country to be betrothed in childhood.

The nature of relations between the vassalages, how the heirs feel about their betrothals, how deep the corruption in Court...You'll just have to wait to find out in Espionage, coming May 16.

I've never gone so deep into the political worldbuilding of a country before, but I really enjoyed constructing the country of Briznom. It was fascinating. Even though I managed to set up some major obstacles for my favorite characters...Briznom has some major flaws, but I still love the story and the people who live there.

P.S. Random tidbit about the name: My sisters and next door neighbor and I were writing a play about a kingdom where the brother usurped the throne with the help of the people, but they wanted the old king back because the new one was actually worse. Never did finish that play. But we needed a country name, and we somehow combined "Brazil" and "nomenclature" to coin Briznom. I intended to someday write a book of "The Kings of Briznom," but I've since dropped the idea. The political arrangement took off in a different direction, so it was no longer canon, and I also realized that the plot was stupid. But I used the country, and retained the name James for the king.
Posted by Morgan Huneke at 6:00 AM