I have an interview with Claire M. Banschbach today about her new book Adela's Curse. First, lets find out a little about the book. 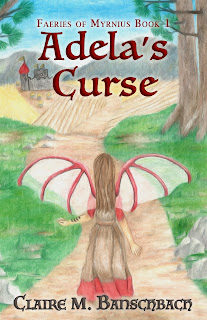 A curse. A murderous scheme. A choice.

A witch and her master capture a young faery and command her to kill their enemy. Adela has no choice but to obey. If she does not, they will force the location of her people’s mountain home from her and kill her. To make matters even worse, the person she is to kill is only a man struggling to save his dying land and mend a broken heart.

Count Stefan is a man simply trying to forget the woman he loves and save a land crippled by drought. When a mysterious woman arrives at his castle claiming to be a seamstress, he knows she is more than she seems.

Adela enlists the help of Damian, another faery, to try and delay the inevitable. He insists she has a choice. But with the witch controlling her every move, does she?

Unlock the rest of the series!

Discover more of the magical world of Myrnius!
5 new newsletter subscribers by Wednesday, March 9, to get a sneak peak of Book 2!
Newsletter link: http://eepurl.com/bhArR9
10 Facebook likes by Friday, March 11, for a first look at Book 3!


Now for the interview.

Hi, Claire! Welcome to my blog. Could you tell us a little bit about yourself?

Hi, Morgan! Thanks so much for having me. I’m a twenty-three year old Physical Therapy student who loves to write and watch superhero shows in her spare time.
What inspired Adela’s Curse?

If I remember correctly, a few years ago I woke up and a scene popped into my head of an injured faery in a forest glade. I had no idea who he was or why he was there, so I began to investigate. Adela’s Curse is the end result of that. :)

How is Adela’s Curse different from The Rise of Aredor and The Wildcat of Braeton?

For starters, it’s set in a completely different world. But I think the main difference is that there is magic and magical creatures. The Aredor series is also pretty heavily action based, and this book is quite a bit slower in terms of pacing and plot. At least it seemed that way to me when I was writing it.

This is the first book in a series. How many books are there going to be? Will they all follow the same characters?

There are currently two more books planned. The second book will have different main characters, but we will still see a few characters from Adela’s Curse come in. The third book will be set quite a bit later than the first two, but we’ll definitely get some references to old characters thrown in. :)

Do you like to snack while you write? If so, what is your favorite writing snack?

I snack all the time. Haha! So goldfish crackers are definitely my snack of choice.

What is your favorite part of writing?

I actually really love when you’re stuck on a plot point or don’t really know what happens next and then going about your day or doing something completely unrelated, you get this enormous AHA! moment. And then inspiration comes in waves. It’s kind of awesome. :)

Which Merlin character would you most like to spend a day with? ;)

Haha! Tough question. I would definitely hang out with all of them! But if you force me to choose, I have a definite soft spot for Arthur. And he could get me unrestricted access to the royal stables. :P

I think I would pick Arthur too. Though my sister pointed out that Merlin's always wherever Arthur is, so he would be there as well. :)
Thank you so much for having me, Morgan!

You're welcome! It was great having you.

Author Bio:
Claire Banschbach was born and raised in Midland, TX, the fourth of eight children. She was homeschooled through high school and is now a proud member of the Texas A&M University class of 2014. She is currently working on her Doctorate of Physical Therapy at Texas Tech University Health Science Center. She continues to write in her spare time (and often when she doesn’t have spare time). She hopes her strong foundation in God will help to guide her writing.

Giveaway!
3 winners! Prizes include 2 copies of Adela’s Curse, and a paperback version of The Rise of Aredor to celebrate its 2 year anniversary on March 11! Open to international entries.

Find the rest of the blog tour here!
Posted by Morgan Huneke at 6:00 AM