I always enjoy seeing where other authors get their inspiration from. It’s neat to be able to put the pieces together and see what shaped a book. I can’t promise many sources of inspiration for Espionage, but I’ll see what I can come up with.

The primary inspiration for Espionage was a dream. You can read all about it here.

I can’t separate the opening scene from The Hunger Games. Something about a girl hunting in the woods with a bow and arrows. And, come to think of it, the involvement of the father is important to both. (I’m talking book here, I don’t recall the movies ever mentioning that Katniss went hunting with her father.)

My own Time Captives was definitely inspiration. Set in the same world at the same time with the promise of tying in to the third book.

Vannie, Kate, and Mandie were partially inspired by me and my sisters.

Vannie’s tendency to modify statements with a “Well,” comes from the Doctor of Doctor Who.

The chapter header pictures were inspired by the Caroline Little House books. 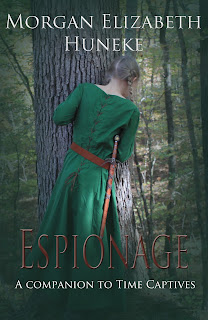 “Do we have to go, Papa? I couldn’t feast with the most crooked politician in all of Briznom.”

Find the rest of the blog tour here.