The End Justifies the Means?

My family recently started watching 24 together. I didn't want to watch it at first--I knew it tended to be very violent, and I was also the kid who made sure never to accidentally glance at the television if I went to the kitchen to get a drink while my parents were watching it. Old habits die hard. But my sister needed "interrogations that crossed the line" for writing research. I personally have mixed feelings on the show. As someone who grew up in politics, I like the political intrigue, and as action/torture/interrogations are difficult for me to write, it probably helps. But there are a few Things I don't appreciate/don't watch, and some violent moments that make me cover my eyes in horror. (I'm very squeamish, and not a big fan of high body counts.) We're currently about halfway through Season 2. That said, on to the main point of the post. 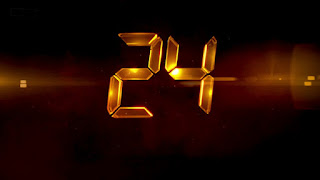 Jack does whatever he has to do to stop the terrorists, even if it steps over the line morally. He will kill, he will torture, SEASON 2 SPOILER he will even cut off the head of a key witness against a bad guy END SPOILER if it helps him accomplish his goal. His goal is to save the president, save America, most of all save his family, and he will do literally anything to get there.

The end justifies the means.

I understand there are some situations where right and wrong gets fuzzy. When you're trying to stop terrorists from blowing up LA with a nuclear bomb, well, how far is too far?

Kind of like the Hunger Games. Is it wrong to kill the others to stay alive? It wasn't your choice (unless you're a Career) to go into that arena. Katniss only volunteered to save Prim. Was it wrong for her to shoot Cato? Was it wrong for Thresh to kill Clove? I believe very strongly in self defense, but how far is too far? Cato wasn't going to kill them when he was being mauled by the mutts. MOCKINGJAY SPOILER Was it wrong for Katniss to shoot Coin instead of executing President Snow? END SPOILER It wasn't in self defense, and it wasn't directly in defense of someone else. (Now Katniss...and Jack...can have some of their killings excused by saying "They're ca-razy." And I personally really like The Hunger Games for the themes of fighting back against evil government.)

But how far is too far? 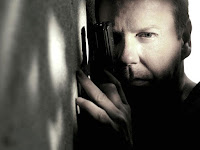 I'll readily admit, I don't have the answer for every situation. Because I do believe self defense is an absolute necessity. I do believe sometimes wars have to be fought. And I believe that sometimes bad guys need to be killed.

But I also believe the end doesn't justify the means.

If you take it to the extreme...

Someone is holding your family hostage, threatening to kill them before your eyes. You can save them, but only by renouncing Christ. You can just say the words, you think. You don't have to really mean it, you're just giving them what they want to save your family. The end is saving your family's life. Surely it doesn't matter if you compromise to get there. The end justifies...

No. Even if the end is good, you cannot compromise God's word. You cannot disobey Him.

That is where you draw the line. If stopping the terrorists, saving your family, preserving your own life will cause you to disobey God, that is where how far becomes too far. When you're thrown into an arena and only one person out of twenty four is allowed to come out alive, when terrorists have kidnapped your family or are trying to blow up LA with a nuke, when you're in the middle of a war and have to go on offense to save your people, you're going to have to go a lot farther than you would discussing with your friend whether or not to go see that movie your mom doesn't think you should see.

How far is too far?

When you're trying to save your country, save your family, save your own life, do whatever it takes...as long as it remains right in God's eyes. God's law is the line, and that we must not cross, even for a good reason. Because disobeying God is too far.

The end does not justify the means.
Posted by Morgan Huneke at 6:00 AM

Email ThisBlogThis!Share to TwitterShare to FacebookShare to Pinterest
Labels: Observations