A Trip to Disney World Pt. 1

We went to Disney World! 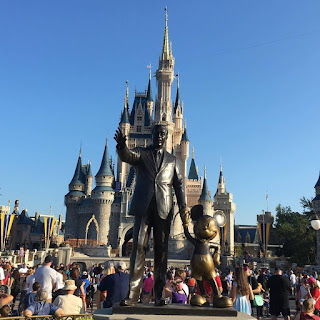 Disney is THE best vacation place I've ever been to. Now, I do like it after Thanksgiving better than in September--it's much cooler and they've got all kinds of special Christmas stuff--but Disney is always awesome. (Though if you go in the middle of the summer when it's super hot and lines are looooooong, I'm sure it's not nearly as fun. But we don't go then.) 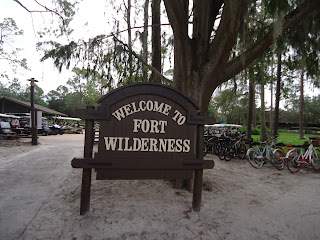 This trip was the first time in awhile we've stayed on property (the last two times my grandma let us use her timeshare points), and the first time ever we camped there. We stayed at Fort Wilderness, and let me tell you, people aren't kidding when they say Fort Wilderness has the nicest bathhouses you'll ever see. We got a nice convenient campsite across the street from the bathhouse and the bus stop.

We got up early and left home at quarter after 4 on Saturday, pulling into Disney midday. The first night we were there, we went to Disney Springs (which I still want to call Downtown Disney) for dinner at the Earl of Sandwich and dessert at Ghirardelli. And the Earl of Sandwich even gave my sister the right sandwich! Twice she's gotten the wrong one there. It was becoming a thing. We finished off the night watching the Magic Kingdom fireworks from the beach at Fort Wilderness. 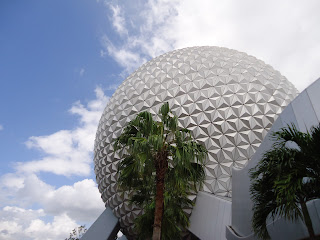 The first and fifth days we spent at EPCOT. It's not my favorite park--my sister who wants to travel likes it better--but there are still many things about it that I love. Like Soarin'. 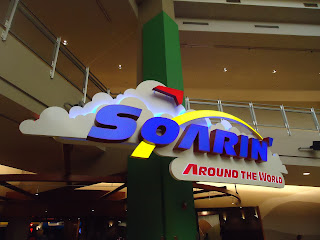 I was afraid when they redid it they'd ruin it, since I liked old Test Track better, but Soarin' over the world is AMAZING. The video was somewhat better done, since they knew better what they were doing. And instead of just seeing California, we got to fly over the Matterhorn, the Pyramids, Paris, Sydney Harbor, the Taj Mahal, and more, finishing off at EPCOT. They even used the same theme in the music, which made me super glad. 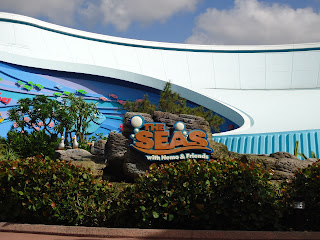 We rode Test Track single rider a couple times, and I don't know why anyone would do it standby. So you get separated. The wait is practically nothing. Though one time, a kid freaked out right before the ride and loading got backed up, so they just threw a bunch of single riders into a car, putting my family together. We did Mission Space Green, because Orange has too many warnings, and spinning. I'd love to feel what it's like to really go into space, but it's probably not worth feeling sick. Green is pretty fun, and we were the first to ride it our second day at EPCOT. Speaking of Future World, Crush likes riding the E-A-C, and the E-P-C-O-T. 😆 We met Mickey, Goofy, and Minnie at EPCOT. We didn't used to do much character greeting, but it's fun. 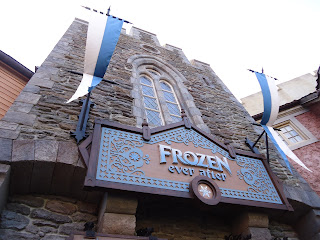 World Showcase is more of my sister's thing, but it's still cool. Like the Frozen ride. My sister isn't happy they turned Maelstrom (the Norway ride) into Frozen, but I really liked it. There's a reason I get along so well with six-year-old girls. We ate some food at the food and wine festival, which was interesting. They're small portions--to get you to eat at more places--but tasty. My mom and I had some French beef and mashed potatoes, the name of which I totally butchered, and some really tasty Canadian cheddar cheese soup. And my dad ate Chinese food and liked it! He's very picky, for those of you who might not know. The second day we were there, my dad brought us dessert while we were waiting for Illuminations: Reflections of Earth, the fireworks show. He came up telling me to grab my ice cream and start licking. Well, I didn't grab it fast enough and I didn't lick fast enough, and it ended up all over my hands, dribbling down my arm, and dripping onto the ground beside me. But it was tasty and I didn't get it on my backpack! 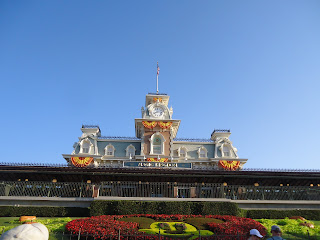 We spent 2 1/2 days at Magic Kingdom, days 2 and 4, and the first half of day 8 before we drove home. There's too much there for me to tell everything. It's a totally awesome park, and has so many rides. We did almost everything. We never do Mad Tea Party, though, because spinning. 😜 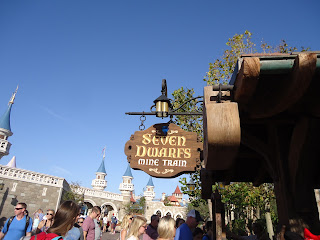 We started out in Fantasyland as always, because even big kids (or adults, I guess) like little kid rides. Pro tip: get on Seven Dwarfs Mine Train right at park opening and get a FastPass for Peter Pan's Flight. Seven Dwarfs is still popular--it's like a kids' version of Big Thunder, but Snow White themed--and for some reason, Peter Pan always backs up really bad. Mickey's Philhar Magic, a really awesome 3D show, is easy to get into, though. And the Little Mermaid ride is pretty easy to get on too. 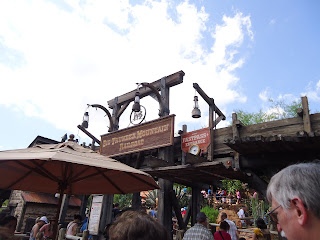 Splash Mountain was closed (yay!...I can't stand the drops), but Big Thunder Mountain Railroad wasn't, so we were able to ride it several times. We even rode it in the dark once, which was cool. Hall of Presidents was also closed, but they were doing this Muppets show in the windows in the area, which was entertaining. Great Moments in History, but Just the American Parts. 😆 We rode the Haunted Mansion a few times...nice air condition. And it's really not scary. At least, I don't think so. The Country Bear Jamboree is also fun. And yes, I have a lot of it memorized. ♫There was blood on the saddle, and blood on the ground, and a great big puddle of blood on the ground.♫  ♫Mama, don't whup little Buford. I think you should shoot him instead.♫ 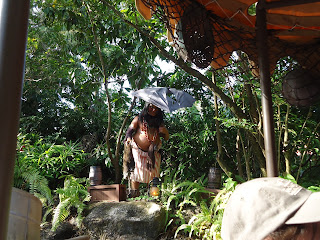 In Adventureland, there's Pirates of the Caribbean. That ride is definitely one of my favorites. It's not weird like the movies, it feels more realistic, and it makes me want to write. I love it when things make me want to write. Twice, the splash from the cannon got me wet. And it was the last thing we rode before we came home. Then there's Jungle Cruise. Where you get to see the eighth wonder of the world: The Back Side of Water! Where you see the lions demonstrating the number one law of the jungle: Don't be a zebra. Where you see the second most feared animal in the jungle: the African bull elephant. And the first most feared animal in the jungle: his mother-in-law. You travel down the Nile, which goes on for niles and niles and niles and niles, and if you don't believe me, you're probably in... Africa. Pay attention. The jokes are corny, but it's fun. And we got the same skipper twice. 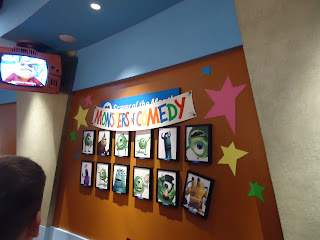 Then there's Tomorrowland. I love the Monsters Inc. Laugh Floor, and I've seen the show enough times to quote...most of the standard parts. "If I say 'you stink' to That Guy, it would be a compliment. 'You're welcome, sir!'" "Call me sentimental, but I still miss the screaming." It's interactive, though, which is fun. When they told the Monsters Inc. story, my dad was Randall. Which was funny. I also like Carousel of Progress, though it's not that popular, and Tomorrowland Indy Speedway is fun, even though it makes you feel like you can't drive. I'm no good at Buzz Lightyear's Space Ranger Spin, but whatever. I am (relatively) good at Toy Story Mania, so it makes up for it. What I don't like is Space Mountain. 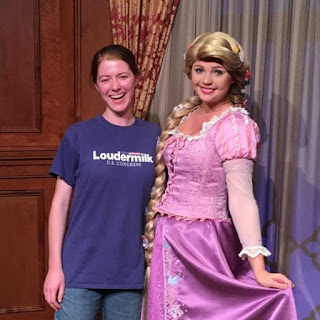 My mom and I went to meet Rapunzel while my dad and sisters went to Space Mountain. However, just as they were climbing the first hill, it stopped and the lights turned on. They ended up getting evacuated, but they weren't allowed to take pictures while walking out. I've always thought it would be cool to get evacuated from a ride. They were able to actually ride it later.

Two different days we were at Magic Kingdom, I wore a Loudermilk for Congress shirt, and got comments from random people throughout the park. My dad was wearing a Cubs shirt one of the days, which also generated comments, so we had a contest. I got 5 comments that day and he got 3. Then on our last day, wearing my other Loudermilk for Congress shirt, I got 2, bringing my total up to 7. Well, basically all of Metro Atlanta did seem to be there that week. Fall break and all. 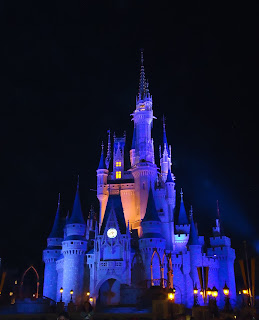 They have a new fireworks show at Magic. It was pretty good, but I did miss Wishes. Maybe I'll get used to the new show in time. I was very glad they kept Tinker Bell flying out of the castle. She ziplines from a window at the top of the castle down to a building in Tomorrowland. That's got to be a fun job.

To be continued...because apparently I can't be brief when talking about Disney...