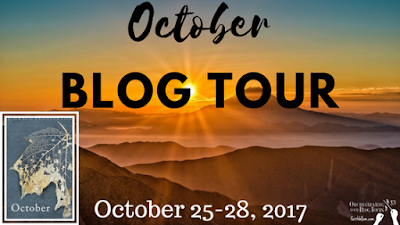 J. Grace Pennington has a new book coming out! It'll be here on the 28th. It's a very good book, though different from her others, and you won't want to miss it. My review is below, but first, a bit about the book.

For Emily Baxter, life is simple. Her world is made up completely of school, church, and the community in the small farming town she calls home. All that changes one fateful Sunday, when a new girl shows up at Pleasanton Baptist—a girl unlike anyone Emily has ever seen. A girl with long red hair, crystal green eyes, and style and posture like royalty.

The months that follow are filled with magic—the magic of ordinary things, of finding pictures in the stars, of imagination and a new sense of beauty. But as time goes by, Emily begins to sense that her enchanting new friend may have secrets that could break the spell. Is October really all she seems to be?


This is a somewhat difficult book to review. It's not the sort of book you can act all excited for, rave about, drum up hype for. That feels disrespectful and even somewhat wrong. Because this isn't one of those fandom-type books. It's too deep and sensitive and powerful and real for that sort of treatment.

It's a very good book. A very important book. It's a very moving book, even generating some tears from me—the girl who almost never cries over fiction. It's a book that will stay with me.

At first glance, October Blake seems almost like a modern day Anne of Green Gables. She finds the magic in life. She's different from anyone else in Pleasanton, and it seems to be a good kind of different. A kind of magic that Emily and her cousin Jax are drawn to. But sometimes the people who seem the happiest on the outside are the ones that are fighting the hardest battles on the inside.

October deals with some tough subjects. And it deals with them in a powerful way, as Emily uncovers things she never expected to have to deal with.

The ending I felt rather than saw coming. It just felt like that kind of book. But that didn't make it any less hard when I got there.

Being a book written by Grace, you would not be wrong in expecting a well-written book. It's very well done in every aspect, though completely different from her other books. The characters are well crafted, the writing is perfect for the story, the progression of the story is perfect.

In many ways, it's a hard book to read. It left me in a somber and reflective mood. It still makes me want to cry. But it's a good book, and one I highly recommend for mid to upper teens and adults. It's not a fun, rollicking adventure, but it is a very moving, powerful book.

J. Grace Pennington has been telling stories since she could talk and writing them down since age five.  Now she lives in the great state of Texas, where she writes as much as adult life permits.  When she's not writing she enjoys reading good books, having adventures with her husband, and looking up at the stars.


Grace has generously offered a paperback book of her new book as her giveaway prize. You can enter at this link or the widget below.