It's finally time for new Ilyon and Acktar books! These books are so fabulous and I got to read all three of them. :) And now it's time for them to enter the world! (Well, Decree doesn't technically come out until tomorrow, but close enough.)

There's a lot of amazing stuff happening on the blog tour...interviews, reviews, character chats, giveaways...you won't want to miss it! You can find a really awesome giveaway and the links to the other posts at the bottom of my post. But first, I'm going to tell you about how much I loved each one of these brand new books.

Already struggling with a harsh winter and the threat of food shortage, a catastrophic event leaves those in the Landale camps reeling. Just when things couldn’t get much worse, camp members fall ill with the same devastating sickness that’s sweeping across the country.

Determined to gain the cure, Jace sets off to Valcré. However, there are only two sources—the queen, or a powerful gang of smugglers who have made the dangerous city their home. When Jace gains audience with the gang leader, he finds the price of the cure is steeper than any of them imagined, forcing him to make an impossible choice—betray his conscience or let those he loves die.

You already know I love Jaye's books. This is no exception. Ilyon just keeps getting better and better. They're struggling with a harsh winter, food rationing, and more, but Jace is happy in spite of it because things are going well between him and Kyrin and he's almost ready to propose. But we all know that when things are looking great at the beginning of a book, something really terrible is about to happen. Catastrophe strikes, somebody dies, and people start getting seriously ill. So of course the happiness is gone. You knew it would be. Things get so desperate. I don't want to give spoilers on what Jace almost does, but goodness. It was such a terrible choice he had to make. And he almost didn't make the right one. But either way, there could be terrible consequences.

He gets to see Timothy and Aaron again, and meet the girl Aaron likes. I have to say, amid all the awful stuff happening, that bit was awesome. Where they all see Lacy and Jace and Holden are like "You like her." That escalated quickly. But that's another story.

Jace has a lot of hard lessons to learn in this book. It's heart-wrenching. It's powerful. And it leads to my favorite chapter to date in all the Ilyon books. It's what we've all been waiting for. I can't give this book enough love. It's just. so. good. Read it now. Unless you haven't read previous books, because they do need to be read in order. But read Ilyon. You won't regret it.

The last thing Aaron ever envisioned was falling for a prostitute. Everything about it spells trouble. However, he can’t help noticing the way her smile lights up when she sees him and how much brokenness she hides behind it. Neither can he ignore how desperately she needs rescue and protection.

When Lacy shares a life or death secret with him, Aaron is willing to risk everything to help her and to show her Elôm’s love. Yet, such a choice could destroy his reputation and maybe even cost him his freedom.

This. Book. Well, I wouldn't exactly recommend it for children or young teens due to thematic material, but I would recommend it for about 15/16 and up. It's so. good. Different from the other Ilyon books due to the lack of Jace and Kyrin, but definitely worth the read. It doesn't delve as deeply into Lacy's issues and psychological damage as Redeeming Love (which I just read) does, but it's still really good and powerful. And that fact lets me be comfortable with recommending it for younger readers than I would Redeeming Love. Lacy is so hurt and broken. So desperate. So in need of Elôm's love. She's in a situation she can't get out of, but doesn't feel she can trust anyone. And Aaron is desperate to help her, no matter what others think. He's willing to do whatever he has to to rescue her and her family. It's such a wonderful, powerful ending. And as a side note, it's so hard to write spoiler-free reviews. :P

Discover more of The Blades of Acktar in this collection of novellas and short stories.

The Blades as They Should’ve Been
A test and the Gathering of Nobles will decide Leith and Martyn’s futures. Can they fight to become more than the Blades they were? Will Keevan accept the man who attempted to kill him as family?

The First Mission
When Martyn visits Surgis, his past seems determined to haunt him. Can he figure out how to forgive, especially when confronted with an enemy in need of his help?

To the Far Great Mountains
A death sends Leith and Martyn far beyond the borders of Acktar. Will they be able to arrest their quarry before they are caught themselves?

From the story of how Leith and Martyn met to Ranson’s search for a life outside of the Blades, these stories will answer plaguing questions and expand the world of Acktar.

When I found out there would be more Acktar books, I was sooooo excited. I'd missed Leith and Renna, and finding out I'd have more of them was like an early Christmas present. Now, not all the stories are about them. There are some about Martyn, some of which involve Owen and Kayleigh. There is one about Ranson, which does have Leith and Renna in it, but is primarily about Ranson. But of course, my favorites were the ones about Leith and Renna.

This is the Lost Stories of Acktar and I love it. It bridges the gap between the early part of the series and what the rest of the series will be. It has stories about establishing the Blades as they should have been, and Keevan and Leith's confrontation and reconciliation. Because it is difficult when your cousin marries your would-be-murderer, but while I totally understand where Keevan's coming from, I'm still with Leith, not Keevan. The relationship between the two families is interesting for sure. And so is the political climate of Acktar.

I love seeing Leith and Renna with their kids. It's sweet and beautiful. But things aren't exactly peaceful in Acktar, so Leith has to be both father and Blade Marshall. And Renna has to be Lady Grayce/Torren as well as mother. And try to pay as little in taxes as possible. XD But I probably shouldn't say any more. Read it for yourself. Because Acktar is pretty awesome and if you love Ilyon, you'll love it too.

Tricia Mingerink is a twenty-something, book-loving, horse-riding country girl. She lives in Michigan with her family and their pack of pets. When she isn't writing, she can be found pursuing backwoods adventures across the country. 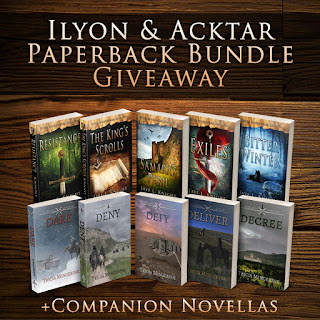 Share in the excitement of the release and enter to win a full signed set of the Ilyon Chronicles and The Blades of Acktar!  (Giveaway is open to US residents only. Cannot be shipped internationally.)

Be sure to stop by each of the character chats (links in the blog tour schedule) for additional giveaways throughout the tour!


a Rafflecopter giveaway
Find the rest of the blog tour here!
Posted by Morgan Huneke at 6:00 AM