It's that time of year again! The time when I make the brutally hard decision of how to rank all the books I've read this year. (And I feel sorry for the books that get read in the second half of December because they don't have a chance. So sorry, Redeeming Love and Children of Jubilee.) I've managed to rank them decently...and I'm just so glad I've set the precedent to count a series as one listing. Looking at you, Ranger's Apprentice. Also, I've excluded rereads, since I figured it wasn't fair to the new books that I love The Hunger Games trilogy and some of the Time Quintet books enough to read/listen to them again. It was a hard ranking, as I've read so many good books this year, but here goes.


I discovered this book when a patron called the library asking to put it on hold. I’m a Narnia nut (just ask my family and friends), so I got on the list after her. I actually just recently read it (in just a couple days) and really enjoyed it. I didn't know a ton about Joy beyond the basic facts, so I loved seeing who she was as a person. Now, this is a novel, not a biography, so it's Patti Callahan's interpretation of Joy. The author's note indicates it is well researched, though one of the "C.S. Lewis" quotes can only be found in the movie of The Voyage of the Dawn Treader, so take it how you will. The biographical facts lined up with what I'd read previously. This is an adult book, and I wouldn't recommend it to younger readers due to the discussion of Bill Gresham's adultery and Joy's own failings in the area of purity, but I thought it was handled fairly well. And I'm a huge fan of C.S. Lewis, so if a book gives me more of him and doesn't slander his character—which it doesn't—I'm all in. (No, he was not a good person before his conversion, and that is referenced. But I've read Surprised By Joy, and I know lost people act like lost people. Obviously.)

As a side note, Bethany was still Bethany Baird when the book came out, but she's since gotten married.

I've been following the Girl Defined blog for a few years now, and learned a lot from Kristen and Bethany. This book was a great big-sister-to-little-sister discussion on the "fairy tale facade," crushes, true love, biblical marriage, being "just friends" with guys, being unequally yoked, qualities to look for in a husband—meaning biblical principles and mutual life callings—red flags, advice from married women, and more. It's a great and informative read for women of all ages. And I love their approach. It's not rules-based. It's more of a "these were our failings and here's what God taught us through His word and wise people in our lives, and we want to share it with you so you can avoid some of our mistakes." I always enjoy Kristen and Bethany's stuff.

It took me awhile to actually read this one because I wasn't a big fan of Just Ella, but once I picked it up, I wondered why I'd waited so long. I went on a Haddix kick earlier this year while sick with a bad cold, and this was one I owned that I hadn't read. It's soooooo much better than Just Ella. Cecilia has always been told that she is the true princess and Desmia who sits on the throne is the decoy to keep her safe. So when things go awry at home, Cecilia and her best friend/sort-of-boyfriend Harper set out for the castle to take her place. But things don't exactly go the way she thinks they will. Lots of palace intrigue and danger, and an ending I didn't exactly expect, and I loved it. Margaret Peterson Haddix is a pretty awesome author and I always (with only Just Ella as the exception) absolutely love her books. But I have to say, it really messed me up to read about a boy named Harper as that's the little girl who lives next door.

7. To Kill a Mockingbird by Harper Lee

This was a family read-aloud and we all really enjoyed it. Everyone acts like the book is all about the trial, but that's really a small portion of the book. I blame the movie, since they deal with the trial through the whole thing, rearranging all the events. It's really more about growing up. The trial is important, yes, as it's a part of the climax and it's the reason Boo Radley has to save them, but it's more about Scout growing up. It's a classic story, and I loved it. So good. I've got to say, though, when Dill was like "Scout, we should get ourselves a baby" I was just like, "uh...where is this going?" Kids are crazy. XD


I'm ashamed that I didn't read this until the movie came out. But in my defense, I wanted to read it long before that, and I just didn't want to read the tattered, stained, old copy the library had. I waited for the crisp, clean, new, movie cover copy. But enough about that. This is the story of Auggie Pullman, a 5th grader with a severe facial deformity, and all the lives he touches. He faces bullying, he faces the involuntary horror of practically everyone who sees him, he faces betrayal, he faces the ordinary hardships that come when your beloved dog gets old and sick, he faces the normal difficulties of middle school, complicated by his face. It's just such a good story. At the point when I read it (before I discovered Ranger's Apprentice), it was my favorite book of the year. It's so sweet, so meaningful, and one of those stories that will always stay with you. And the movie was pretty good too.

5. When God Writes Your Love Story by Eric and Leslie Ludy

This is another one of those books I'd wanted to read for a long time, but only got to it this year. I hadn't had access to it, but Christmas money! It's probably the best purity/relationships book I've read. Honestly, though, I get the impression that these things are the things the others are trying to say, the Ludys just say it better. Just like in When God Writes Your Life Story, their whole thing is to let God direct your life. They cover the same kinds of topics like waiting on God for the right one instead of dating all the people, purity being greater than just the technical externals, and more. And they do it in such a having-a-heart-for-God focused way, which I think a lot of others don't do as well at explaining, thus causing all the "purity movement" revolts these days. The Ludys' focus is clear. Letting God direct your life. Surrendering to Him, even if it means being single for now or forever. No formulas, just following God as He leads. And I love how it's written by a married couple. It's fantastic.

She hasn't released the cover yet, so sowwy. She's hoping for a release next year, and I got to beta it! This is Jaye L. Knight's contemporary romance which she's publishing under the name Jaye Elliot. I'm just going to have to tell you about what's in the official description because I'm not sure how much she wants out there yet, but it's about an artist named Alex Jennings who has struggled with her faith ever since her brother was killed in Iraq and just wants the pain to end. There's also Riley Conrad, who is home from the military, scraping up a living from his bartending job when he really want to open a coffee shop. And the story is about what happens when they meet. This isn't your fluffy, Hallmark Channel romance. This is a deep, real, raw story about hurting people finding their way back to God. Not a big surprise if you've read Ilyon Chronicles. No Chance Meeting is a great book, and I can't wait for it to be shared with the world.


It's coming next week, people! I love ARCs. I'll have a more detailed review next week, but for now, this is basically The Lost Stories of Acktar. It's a collection of short stories and novellas relating to The Blades of Acktar. Some tell backstory, like about little Leith and how Leith and Martyn met. Most of the rest are about what happens after Deliver. And it's setting up for more Acktar books! Seeing Leith with his kids is just about the best. I probably shouldn't say too much more so I don't spoil next week's review, but it was good. It was very, very good.

I know you knew this one was coming. Ranger's Apprentice is one of the best things I've read all year and I can't rave about it enough! Especially considering I wrote a four-part review of the series... But seriously, Will and Halt and Horace and all the rest are so awesome, and I don't care if John Flanagan's worldbuilding is kinda lazy because his characters are beyond amazing. I probably shouldn't rehash my long review too much, but I want to be a Ranger, Will is the best, I hate it when John Flanagan kills characters I like, Halt's backstory is just wow, and I can't believe I have to wait until May 28 for Duel at Araluen! You can read my reviews here, here, here, and here. 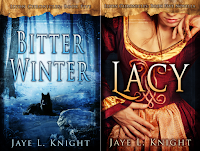 Yes, I'm doing these together. And also they'll get more detailed reviews in my blog tour post next week. Bitter Winter is the next installment in the ever amazing Ilyon Chronicles. The winter is extreme. They're running out of food. We know it's only a matter of time until camp gets found. And then people get deathly sick. And the only people with the cure are the queen and a smuggler. Jace is desperate. Soooooo desperate. So desperate he's in danger of doing something he'll regret the rest of his life. It's such a good book. And then there's Lacy, because Aaron met a girl. :) That one I only recommend for older readers, but it's SO. GOOD. Such a great message. But again, more on that next week for the blog tour.

So many good books this year! You can see my full reading list for the year on Goodreads. What are your favorite books that you've read this year?
Posted by Morgan Huneke at 6:00 AM