Realm Makers was amazing! Seriously, it was one of the most amazing experiences of my life. I mean, where else do you have a room full of people in nerdy costumes praying together? This is what they say on the Realm Makers website:

"Are you a creative person who loves science fiction and fantasy, but also makes your spiritual growth a high priority? Have you found that you’re a little too weird for the usual church crowd, but don’t exactly fit in with the sci-fi convention set either? Well, now there’s a place for you to learn, share your talents, and commune with people a lot like yourself."

And now that I've gone, I can say that it's completely accurate. I completely felt like I belonged. We're all writers. We're all Christians. We're all there to learn and share ideas and build each other up and inspire each other and make new friends and just be a community—a family—unlike any other. The only negative thing I can say about Realm Makers is that the conference ends and we all have to go back home. (And the book store is a negative to your bank account. But that's a good problem.) So if you're a Christian speculative fiction author, I highly recommend you go to Realm Makers. It's more than worth it.

So for my experience.

I roomed with Jaye L. Knight and Tricia Mingerink and we had such a great time! We spent hours talking about everything from Marvel movies to childhood imaginative games to our current WIPs and future writing projects to spiritual growth. Before the conference, we went with my family to the Arch, which was a lot of fun. And included conversations about how much my sister hates Keevan from Tricia's Blades of Acktar series. XD 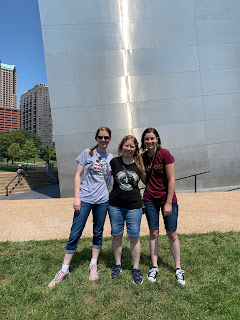 Brent Weeks was the keynote speaker, and both his opening and closing keynotes were fabulous. He was very inspiring, and funny too, while being very real about the ups and downs of his faith and writing journeys. I haven't read any of his books, but I was very impressed by him as a person, and want to read his books now.

I did Julie Hall's continuing sessions on indie publishing, and while there were things that I already knew from my 6 year journey as an indie author, I still learned a ton. I did have to miss parts of it to go to appointments, but I hope to get the conference audio to fill in the gaps...and so I can experience the electives I had to miss because there were too many good ones at the same time. Plus, a fellow Realmie gave me a cool idea for Time Captives bookmarks during the continuing sessions and I can't wait to try it out!

And I met Jill Williamson! She had to fill in for a faculty member who last minute couldn't attend, and it was during my scheduled appointment, but Tricia offered to let me join her in her appointment and it turned out great! Yes, we fangirled. Jill is an amazing person, so sweet and easy to talk to, and the half hour just flew by. It's so hard to choose what my favorite part of Realm Makers was, but meeting Jill was definitely up towards the top. And she was excited I brought Replication to Disney and even drew a Mickey in it! 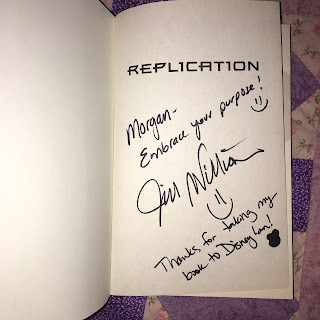 I had two pitch appointments, and I was scared about them, but they proved to me just how unique and special Realm Makers truly is. Before my first one, the lady in charge of appointments invited me to practice on her, and then she prayed with me—and then we talked a bit about Doctor Who because they were holding the pitches in the room called "Davos" and we both kept wanting to read it as "Davros." And before the second, a lady came to me saying she was the "designated pray-er on duty" and she prayed with me as well. The pitches went well, and I'm looking forward to seeing what God does in the future.

The awards banquet was so much fun! Dressing up is awesome, and there was such a wide variety of costumes. Even in our little group, we had Anna from Frozen (me), Ranger Maddie from Ranger's Apprentice (Tricia), and gender-swapped Daryl from The Walking Dead (Jaye). So when Tricia and I got to our room to get ready, Jaye told us she was almost done, she was just cleaning up the zombie blood in the bathroom. It was awesome. XD I loved that they were playing songs from movie soundtracks, I loved all the costumes, and it was just a great experience. Nothing quite like it. And then afterwards I talked to one of Jaye's carpool buddies about the time she met Bradley James (BBC's King Arthur). I'm so jealous.


The electives were fun, especially Jill Williamson's worldbuilding class. I loved it so much. And there was definitely an information overload. So many things to learn!

The book festival was the last night. I got some of my books signed before the festival, like my Bryan Davis and Terry Brooks books. And I'm pretty sure I was fangirling bigtime over Dragons of Starlight and Echoes From the Edge (now Time Echoes) when I was talking to Bryan Davis. He was pretty awesome and gave me an extra book on top of the one I bought. I also met Wayne Thomas Batson and it was pretty cool. Then I bought a copy of The Story Peddler by Lindsay A. Franklin, which had won several awards, and got it signed too.


Most nights, Jaye, Tricia, and I were pretty good about going to bed early, but not that last night. We just didn't want it to end. So we sat outside by the fountain for a while and talked, and then went to our room and got ready for bed and then talked some more, and then turned off the light and kept talking a little while longer. I miss them both already, and sincerely hope we can work out another visit in the near future.

And we had to go home. That's the worst part of it. It's over too quickly. But I am beyond glad that I went. It was thoroughly amazing, and I really hope I get another chance to go to Realm Makers someday!
Posted by Morgan Huneke at 6:00 AM