The Book Was Better

First off, MAY THE FOURTH BE WITH YOU!!!!! And make sure you watch something Star Wars today to celebrate. 😉 Now, on to my actual post.

Anyone who knows me knows I constantly (annoyingly, I know) say "the book was better." Talking about 101 Dalmatians? The book was better. Oh, you liked the old Johnny Tremain movie? I was unbelievably disappointed with that one. The book was SOOOO much better. Even with adaptations I really like, The Hunger Games, for instance, I'm always going, "well, in the book they (insert whatever was different)." So I'm going to give you my top three reasons why (generally speaking) the book was better, and three ways to get an adaptation right.

First, why the book is better. 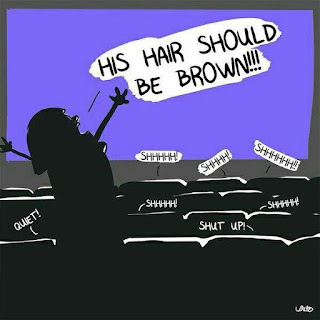 1. It's the original format

Unless it's a novelization, but that's a different story. And don't get me started on novelizations of movies based on books. *glares at novelization of The Tale of Despereaux*

2. Books can be longer

I'm not talking overly bloated with unnecessary fluff. I'm talking about how movies are limited in their screentime because most directors aren't Peter Jackson, and so sometimes there just isn't enough time to tell the whole story in a movie. And so sometimes (often) they cut entire storylines out of the film adaptation. *glares at Johnny Tremain* There's also less time for character development, which leads into my next point:

3. Books allow you to get a look inside the characters' heads

You just really can't do that in a visual medium like you can in a book. Sometimes there's voiceover from the MC narrating their thoughts, but it's not done that often, and honestly, I feel like it's really hard to do without being cheesy. It just doesn't work for most stories. Now in a book, you can really be in the character's head. Like in The Hunger Games trilogy. We really see Katniss's internal turmoil, understand what she's going through, know what she's thinking about things...in the books. In the movies, you just sort of get snapshots. Not saying I wish they'd done V.O., or that I don't like the movies—actually, I love them *goes to cry over Finnick*—but you're really missing something if you haven't read the books. 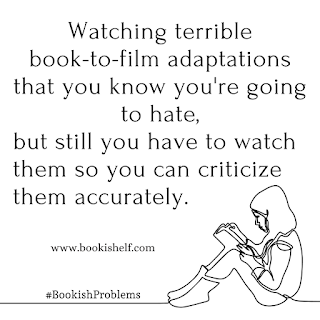 What can you do to get an adaptation right? There are things. Some of my favorite movies are based on books, after all.

LOTR was made by book fans, for book fans. And it's enduring because of that. (Peter Jackson went overboard when he made The Hobbit, but let's not talk about that.) He truly loves the material, and he gets what it's about. Yes, he changed some things and infamously left out Tom Bombadil, but even so, LOTR is filmmaking at it's best. Similarly, while The Giver made some significant changes to the source material, it's abundantly clear the filmmakers understood what the book is about at its core.

Contrast that with A Wrinkle in Time (2018). Not only did they cast a girl who was too sweet to make Meg's attitude believable, they clearly had no understanding of the book. I mean, how do you go from Meg saving her brother by loving him to Meg saving her brother by demanding "I deserve to be loved"? And the clear "like and equal are not the same thing," anti-communism, it's good to be different message translated to something that boils down to...we all look different, but on the inside we're all just middle class people with first world problems? And don't get me started on how they treated the storyline itself.

2. Involve the author, when possible

Yes, I realize some authors are a disaster to work with on an adaptation (like P.L. Travers). But there's a reason Old Yeller and The Hunger Games trilogy have good adaptations. The authors helped write the screenplays. So glad Francine Rivers adapted the screenplay for Redeeming Love, which is coming next year.

3. If you have to change everything to adapt it to the screen, just don't

Seriously. If a book as it is is "unfilmable," why are you even trying? Some books just don't translate well to the screen and that's okay. Come up with an original idea. I'd far rather go see a completely original movie than endure my favorite book's utter ruin. There's nothing like being excited for an adaptation and leaving the theater or turning off the TV disappointed. Don't do that to me. (Reasons why I've only seen maybe five minutes of Percy Jackson.) So if a book was popular, but unfilmable, just let it be a popular book. 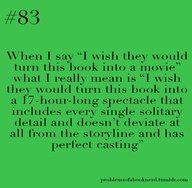 When I was a kid, I wanted to start a movie company that made movies that were actually like the book. That childhood dream will probably never be realized, but it's still fun to think about.

What's your top "the book was better" moment?
Posted by Morgan Huneke at 6:00 AM