Why You Shouldn't Overpower Your Characters

Superpowered characters are great, aren't they? They can do all these amazing things and save the world and they're just plain cool! You can't go wrong.
Or can you?

There are people who will disagree, I've seen them on Pinterest, but I think most people would agree that you shouldn't overpower your characters. It makes them unrelatable, undefeatable, lack character growth, and, okay, it does often make for some cool visuals. I'll give you that.
Let's look at a couple of these things that make overpowered characters...not the best with a few examples from popular culture.
Live-Action Mulan vs. Animated Mulan 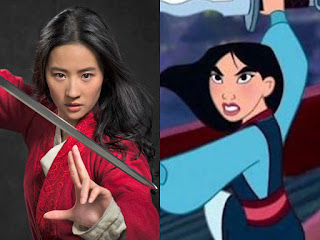 They're the same character, right? Well, not really. Both of them may be Chinese girls who don't really fit in, who go to war in their father's place and end up saving China, but that's about where the comparison stops. Animated Mulan is an outspoken tomboy who loves her family and, through hard work, perseverance, and ingenuity becomes the person she needs to be in order to save China. Live-action Mulan basically just has superpowers. All she has to do in order to be what she needs to be to save China is decide to use her powers. And that doesn't really take much convincing either.
We see a lot of character growth in the animated Mulan. She's really kind of a mess when she arrives at the army encampment. She has no idea how to blend in, she's no good at any of the training exercises, and she's about ready to get sent home. Now, a lot of her growth in her abilities does happen in a training montage during a song, which isn't necessarily the best way to do it, but it's much better than not doing it at all. And it's a triumphant moment when she comes up with her way to use the weights to get to the top of the pole.
Live-action Mulan has superpowers as a kid that she's told to hide. And she does, until she gets tired of not doing well in training, and then she just decides to use her powers after all. That's pretty much it. And then because she has these superpowers that she decided she wanted to use after all, she was able to take down the Huns...oh wait, they weren't Huns in this movie...and have a showdown that's not really earned. Animated Mulan earned her victory. Live-action Mulan just did it with her Jedi powers.
Rey vs. Ahsoka 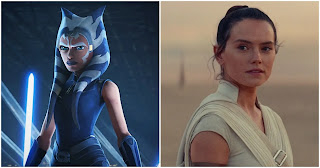 Disclaimer: I'm a huge fan of Ahsoka Tano. But you know, I actually did used to like Rey, before I realized she was one of those characters who can do literally anything the plot requires with no need to learn how to do it. And that's just not relatable.
People do have innate talents. I'm not going to argue with that. But you still have to learn how to use them. Even someone with innate musical talent still has to learn and practice in order to become a great musician. It may come easier to some people than others, and some will attain higher levels than are possible for others, but that doesn't mean it just happens with no effort.
And that's what I mean by being relatable. Rey has a lot of power and a lot of potential in the Force. I don't have any issue with that. But when I see her using a Jedi mind trick when she's only just heard of the Force and basically lifting an avalanche of rocks when her only "training" consisted of Luke telling her why the Jedi needed to be gone, well, it just doesn't work for me. Also, she doesn't actually fail. Even in TLJ, which was pretty much all about learning from failure, she doesn't fail. And that's an impossibly high standard. No one can actually relate to that. (If they'd played up her abandonment trauma, it would have been different, but they were too busy trying to move the characters through the plot points.)
Ahsoka, on the other hand, actually fails a lot. And learns from those failures and succeeds next time. She is powerful, but she has to learn how to use those powers. She's not perfect. For instance, she completely loses her Force grip on Steela Gerrera when she gets shot in the shoulder and drops Steela over the cliff. (Not that I was that sad...Steela was trying to make a move on Lux Bonteri and I ship Luxsoka. But anyway.)
Ahsoka's a much more relatable character. While none of us can (obviously) relate to her Force powers and I certainly hope none of us can relate to being a child soldier or having a "friend" frame us for murder, I'm sure there are a lot of us who can relate to being a cocky kid who thinks she knows everything, talking back to authority figures, and making stupid (and sometimes very costly) mistakes because we think we know what we're doing and we really, really don't. And when we see Ahsoka overcoming her flaws, learning from her mistakes, and growing into a truly remarkable young woman, we know that we have the ability to grow into greatness as well. But Rey, well, she can already do everything she needs to do.
Captain Marvel vs. Black Widow 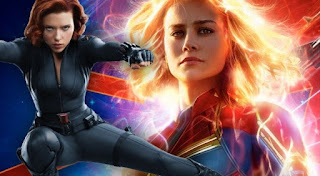 This is probably an unfair comparison because technically Black Widow has no superpowers, but TBH, I was having a really hard time finding a good contrast for Captain Marvel. But seeing as how I want to talk about invulnerability/undefeatability and its effect on the stakes of a movie and Nat literally did die, I'm going to make it work. (And I'm still waiting on that Black Widow movie, Marvel...)
We all want the hero to survive. We want them to win. But...we also want there to be stakes. We want to feel like that victory was earned. Like there is a possibility that they might die instead (even if we know they won't because they're in the next movie). Because without some stakes, why should we really care?
When Captain Marvel taps into her full power, she becomes basically indestructible and all powerful. To quote "Pitch Meeting," the powers she has is "all of them." She defeats a whole bunch of aliens singlehandedly with basically no effort and comes out of it pretty much without a scratch. The whole fight scene looks pretty cool, I'll give you that. But there's no wondering if she'll fail, or if she'll win but have to spend a month in a bacta tank afterwards. Sorry, mixing together my fandoms. But you get my point. Yes, we know her adversaries could destroy everything, but we also know they won't because literally no one stands a chance against fully powered Captain Marvel.
Nat doesn't have any powers and they still haven't actually come out with her solo movie which we were supposed to get nearly a year ago, so I'll do my best. But the fact is, she's super awesome, being a highly trained assassin, but she's not invulnerable. Evidenced by the fact that she did die to get the soul stone. The chances of Nat losing a fight are small. But you know, she can't blast someone with unlimited power if a villain gets the upper hand. And she can fall off a cliff and die.
When the protagonist is completely unmatched by anyone else in the story, there aren't really any stakes, and that just makes it less interesting. But when your character could die, when they could fail, that raises the stakes and makes it a whole lot more interesting.
Overpowered characters might happen a lot in fiction (and according to Google is apparently super common in anime), but there are better ways to do it. Ways that create characters that are more relatable and more inspiring with stories that have more interesting stakes.
Have a Studio C about the creation of Superman, yet another overpowered character. 😆
Posted by Morgan Huneke at 6:00 AM