Okay, so that doesn't actually have anything to do with the Espionage cover reveal, but today is the day! I'm going to be mean and not show you the cover right off, because I have a story to tell. 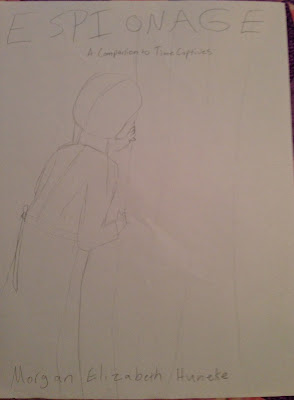 For the record, I'm horrible at drawing concept art. Give me a photo for reference and a couple days, and I can give you a realistic grayscale drawing (unless there are feet), but concept art? No. Still, this was enough to commit the idea to memory.

I had in mind for the cover model a little girl I babysat at the time. However, time went on and she moved away and then I moved away and her hair was getting too dark for Vannie's blonde anyway. Plus we had no good spot for the photo at my old house.

I finished the first draft at the end of September in 2014, having really started working on it that July. In preparation for the release of Creighton Hill in early 2015, I asked my pastor's wife, Mrs. Whitmire, to beta read it for me, and ended by giving her the entire Time Captives trilogy and Espionage within a few weeks. Fast forward to that fall.

Espionage takes place in the fall, so I knew that if I wanted to do the cover this way, I needed to take the photo soon, even though I didn't intend to release the book until the next spring. So we asked Mrs. Whitmire if her daughter Danielle would want to be the model for the cover. They were enthusiastic about the idea, for Danielle would make a perfect Vannie. I asked Ashley Elliott if she would be willing to take the picture. I'm a terrible photographer, and I already knew Ashley was good, since she did a fantastic job on the photo for her own book. I was delighted when she said yes.

So I had to make the dress. I knew I wanted green. I had in mind something similar to Susan Pevensie's The Lion, the Witch, and the Wardrobe dress. It was a bit difficult to find the fabric. I originally wanted linen or linen look, but I could find none that came in dark green. I settled for cotton with a coarser weave, that wasn't quite as dark as I was envisioning, but good enough.

Taking measurements after church, going over to have a fitting, buying strips of leather and strings of faux suede, taking the dress camping... 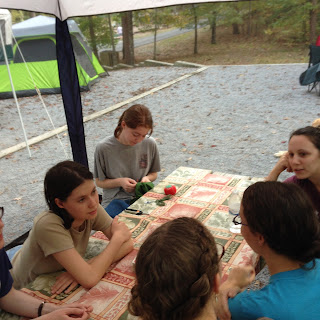 The dress has hand bound eyelet button holes, and I couldn't just stop work on them because our church was having a campout. So I brought it with me. I call it my Jill Anna moment because I was sewing while we were playing Monopoly Deal. And if you don't understand what I mean by that, go read Water Princess, Fire Prince. Right now.

And finally we were ready. My mom found a perfect tree in the backyard (henceforth known as Danielle's Tree), and I set up the photoshoot time. Danielle got dressed up, her hair braided, my sword strapped around her waist, and we went out into the clearing in the backyard.

Ashley took lots of pictures, some what I'd envisioned, some other things I wanted to try, some I wanted to have for promotional materials, and some behind-the-scenes. Like when the belt was slipping because I couldn't find good fasteners and so it was clipped and bobby pinned together, and I had to go fix it. 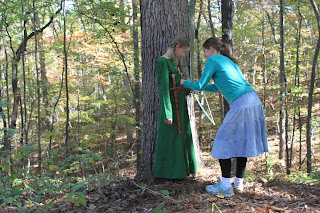 Finally we had the right picture. I played with it on Photoshop, finding text effects I liked, photo effects that made it look like a book cover, and figured out exactly what I wanted. Which was very much what I had envisioned in the first place. 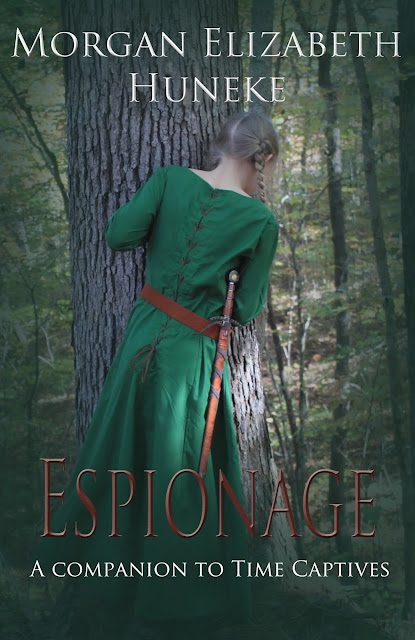 And there you have it: The cover of Espionage. It's quite possibly the biggest cover project I've done so far, but also the most rewarding. And now Danielle can be famous. :)


“Do we have to go, Papa? I couldn’t feast with the most crooked politician in all of Briznom.”

Other blogs revealing the cover, some with author interviews: