J. Grace Pennington has published four science fiction novels. They each have a unique bent to them, but this one is very different. Each book is a standalone, but as with any series, you get more of the story if you read them all in order. In Reversal Zone, the main character, Andi Lloyd, becomes the only one who can save the ship and crew. Can she do it in time? 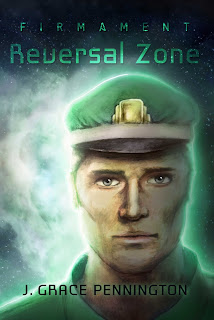 Nothing is as it should be.

After weeks of boredom, Andi is excited when the Surveyor is called upon to rescue a freighter that mysteriously vanished in uncharted space.  Excitement quickly turns to unease when the ship encounters an unknown phenomenon—a cloud that appears not to exist.  But with the freighter's crew in danger, the Surveyor has no choice but to venture into unknown territory.

As soon as they enter the cloud, its unstable effects wreak havoc on the ship.  They're flying blind.  Every piece of equipment is malfunctioning.  And every member of the crew is unable to think straight or act like themselves—except Andi.

Now she's expected to guide them through the predicament with no previous command experience and no one to turn to for support.  And with each passing hour, it becomes clear that if they don't escape the cloud soon—they won't escape it at all.

It's been too long since I've gotten to rave about a Firmament book -- far too long. Two years, Grace! How has it been two years? Sure we got the very awesome Implant in between, which I read in a single day in the middle of building a basement, but I've missed Andi and the gang. Finally I've gotten to see them again. I stayed up late reading....And there was the time, well.... I was on break at work and I was like "hey, I have a kindle app. I have wifi. I'm going to download it and read." Thankfully I had the self control to stop reading when my break was over, because even though I work at a library and we're all about books, I really don't think that would have gone over well. So the book.

Radialloy will always be special as my first encounter with Grace's work and In His Image is special because ELASSON! but Reversal Zone was awesome and a worthy continuation of the series. It never quite went in (bonus points if you know what I'm referencing) how the reversal zone worked scientifically, but compared to some of the stuff on Doctor Who, it was totally believable (and I'm a Whovian, so I can say that). Plus, Grace pulled it off well. She's too good a writer not to. I guess you could say it was just more sci-fi than previous installments.

My wonderful friends on the Surveyor hurt my heart. Only Andi is normal. Only Andi can save them. Only Andi can really do anything. Which means all the others aren't even acting like themselves. Which is so hard to see. I'm not one of those crazy August fangirls, but I do really like him as Andi's brother, and I hated to see sweet, gentle August act like that. And the Doctor. And Trent. Trent's behavior was strange. But Guilders was strangest. Especially now that I understand he was inspired by Spock, his development in this book...wow. And Crash. I'd better not say too much about Crash.

Of course, it wouldn't be a Firmament book without some sort of mystery. Someone has been sabotaging things and with everyone acting so strange, it could be anyone for any reason. Of course, I can't say who it is because spoilers, but I wasn't really expecting it, and it hurt. And that. ending. How could that happen? They weren't prepared for that! And how are they going to deal with the aftermath of the outcome? Grace, I need to know what happens next!

Don't think because it hurt my heart that that's a bad thing. That's actually a very, very good thing. I'm very invested in these characters and their stories, and I feel their pain when things don't go well. Of course things don't go well -- what kind of a book would it be if they did? I HAD to know what happened next. I HAD to know what was causing everyone to act so strange. I HAD to know if it would turn out all right in the end. And I loved it. I even loved the feels it caused. (because fangirls like feels, obviously.)

In short, Grace's books are always fantastic, and if you haven't read them yet, you're really missing out. So get yourself over to Amazon and start reading the Firmament series by J. Grace Pennington. And don't forget to read the bonus prologues and epilogues on FirmamentSeries.com. 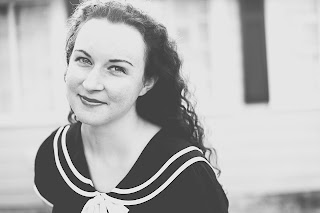 J. Grace Pennington has been telling stories since she could talk, and writing them down since age five.  Now she lives in the great state of Texas, where she writes as much as adult life permits.  When she’s not writing, she enjoys reading good books, playing movie soundtracks on the piano, and looking up at the stars.

You can find out more about her writing at www.jgracepennington.com.

Grace is generously offering three prizes. A signed copy of each of her three previous novels in the series. They are each standalone stories, but they are also connected. If you would like to read more about them, you can read about them here: Radialloy, In His Image, Machiavellian.

To enter the giveaway, please fill out this form.