About two weeks ago, I was working on plotting the sequel to Espionage, and, as I was frustrated with my lack of progress on the Cassie story and was more interested in Vannie and Kyle, I decided to just go for it and start writing the story. Then I remembered Camp NaNo was about to start, looked to see if I could set a page goal instead of a word goal, saw I could, and decided spur of the moment to write the Espionage sequel for NaNo.

My goal is to write 40 pages this month, which should equate to roughly half the book. Espionage was 79 notebook paper pages, and I anticipate the sequel being somewhere between 80 and 100. The goal is fairly reasonable, so I should be able to make it, and possibly (hopefully) surpass it.

My project description from NaNo is this: It's almost Vannie's 18th birthday--which means she'll finally have to marry Kermit. And Briznomians are mysteriously disappearing from the coastal villages. I'm not entirely sure yet how it'll all shake out, but I have a few plot goals floating around in my head which I'm eager to work into a cohesive storyline. I've already introduced a new character, Walter Stipland, and discovered that Kate has a beau, which is causing Vannie to have a hard time getting along with her. It's certainly been interesting. 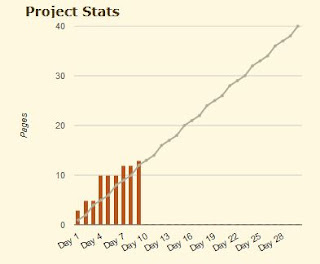 I'm keeping ahead, though the "average per day" and the "at this rate you will finish on" are a bit confused as 40 cannot be divided evenly by 30 and NaNo apparently doesn't allow decimals (a fact which annoys me greatly).

So far, I've written in the church parking lot, at the dining room table, a little bit in the car, while camping on Skidaway Island where we waited out a tornado warning in the bathhouse (though I didn't write during the storm), and mostly in my bedroom.

I'll give you a snippet, and leave you with that.

"Kyle, they said you were here, and they said Sir Cumberland wasn't, which is a pity, because I need to talk to you both. It's a matter of importance at Court, and for Briznom, and Gordan won't take it, so you and Sir Cumberland will have to. Where is he?"
"Good afternoon to you too, Walter," I said, swiping my face for remnants of tears.
"Good afternoon, Vannie. Where is your father? He's older than Kyle and I, so we need his advice."
"He and Mama took Kate visiting. She has a beau now, perhaps you've heard." I couldn't keep a sour note out of my voice. Kate and I hadn't been getting along well in the two months since she'd begun courting, which was entirely my fault. So was the warning glance Kyle sent my way.
"What's going on, Walter?" Kyle asked. Walter did have to be prompted, if we wanted him to get to the point within a reasonable amount of time.
"Villagers have been disappearing. It's been going on for several months now, but I've only just found out. Gordan says it isn't anything to worry about, it's probably just a story cooked up by peasants looking for fame, but Callie and I don't believe him. He may be her father, but neither of us trust him. He won't do anything, so that's why I needed to talk to you, Kyle, and to Sir Cumberland. When will he be back, Vannie?"

Are you doing Camp NaNo this April? What do you want to see in a sequel to Espionage?
Posted by Morgan Huneke at 6:00 AM