So I didn't update you on NaNo last week. Sorry. I had some things to say about contentment instead.

Week 2 wasn't so great for writing. I lost steam, had a lot of things to do, and just didn't make myself sit down and write enough. And so I fell behind and didn't even finish the chapter until the beginning of week 3. (The way my NaNo goal works with my page-per-chapter goal, I have to write a chapter a week.) However, week 3 turned out to be fantastic. Vannie's emotions started running high, I really got into her head, and I finished a two-pages-too-long chapter last Saturday, putting me ahead on my page goal.

Another thing that happened regarding this story during week 3 was that I finally, thanks to Kendra, figured out who Kermit is as a person. She's been at me for awhile on how I need to find his positive qualities, and I just couldn't think of any. Then after we chatted for awhile on the difficulties of writing a middle grade-appropriate book about an ENFP who wants to be in a relationship (yeah, Vannie's being difficult that way), the talk turned to Kermit and she assigned me three pages written from Kermit's POV. And wow. Now I actually like him...and feel sorry for him. Turns out, he's not actually an annoying, book-hating glutton. He's a dyslexic, INFP stress eater who's terrified of Vannie and doesn't like to tell people what's really going on in his head. Oh yeah, and she's also very, very determined to never see anything good in him. Perspective changes things. 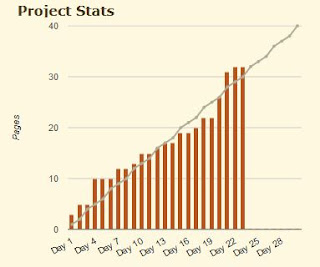 I think I'm going to make my goal. I just have to keep writing a chapter every week, so that I can finish the book in 2 1/2 months. That would be awesome.

My first snippet is from week 2 writing.

"Do you listen to this child?" Gordan Holbrook demanded. "He disrespects his elders, calling into question my devotion to Briznom--he whose father tried to murder one of our members!"
Kyle bristled. "I am not my father."
Sir Strickland, a youngish man who had not served much longer than Kyle, though several years older, gained his feet. "No, you cozy up to the other side. You abandoned not just your father's immorality, but his entire belief system. You could not sift good from bad, but threw the baby out with the bathwater. You are nothing but a puppet of Sir Cumberland."
"Kyle is his own man." Sir Cumberland joined the fray. "He already had a well-grounded set of principles when I met him. My family accepted him when his own rejected him, yes, but we never forced him to follow our beliefs."
"And yet you refuse to let him speak for himself," Sir Maitland jumped in.

Kyle cracked a small smile. He'd seen Kermit try to dance. "His dancing can't be helped. But his hands are probably clammy because he's nervous. I think you intimidate him. You intimidate a lot of people."
I raised my eyebrows.
"You're smart, knowledgeable, opinionated, feisty, overwhelming, determined, and you don't have the good sense to know when to stop. Ever. Which is why I'm not going to tell you what happened at Court until after you get through the ball."
"Kyle!"
"And don't bother trying to get it out of Walter or your father. I've already made them agree you need to be kept in the dark or you'll never make it through the ball."
"Kyle! You'll drive me crazy."
"I know. It'll give you something to think about and keep you at the ball with Kermit, because I won't tell you otherwise."

And a bit from Kendra's assignment:

"Here's your speech." Kermit's father handed him a card covered in several lines of writing.
Kermit blinked at the writing, willing the swimming words to be still. Of course they wouldn't. Not for the first time, Kermit wished he'd told someone that it wasn't that he didn't like to read, it was that the letters never stayed still long enough. But everyone just thought him a poor student and a lazy one.
I am the future Sir Cumberland. The thought reminded him that he had to get through this. Honestly, though, it sickened him. He'd never be able to understand all of Court's proceedings, never be able to draft legislation, never be able to make a compelling argument. Unlike Vannie. And that was the other half of his problems. However much he walked on eggshells around her, their relationship had never improved, and he was convinced it never would. She was too determined to see nothing good in him; he too scared of her to explain who he really was.