Today I'm featuring Rosette Thornbriar by Rachel Roden. It's a fun Western take on the traditional Sleeping Beauty, and an enjoyable bedtime story-type read. Check it out! And don't forget to enter the giveaway for the Sleeping Beauties and comment for a chance to win an early read of Kendra's The Seven Drawers and Cindy Ellen!

About the Book
Once upon a time, way out west...
Back when they were young'uns, Fleur Guardstone proposed to Rosette Thornbriar with a cigar band ring. However, not long after, she disappeared back into the forest and hadn't been heard from since. However, when Fleur hears reports of smoke coming from that woods, he's determined to find out if it is, indeed, his dear Rosette. If he can get past all of the briars. 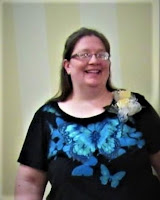 About the Author
Rachel Roden is a natural story teller, capable of weaving the most hilarious of fairy tales. She fell in love with the Lone Ranger in her teens, but ended up with a basketball referee instead. Together, she and the Ref homeschool their four children in the Piney Woods of East Texas, as well as any other odd kid who ends up in their house. She might also be the sole human who still uses math after college.

The bell over the door rang again. Young Amory Snoobly unwrapped her shawl and cape and hung them up before striding up to the counter. Her family ran the town newspaper, so Cindy was not surprised when Amory pulled paper and pencil from her apron pocket and declared, “Papa saw a strange beast outside your door, so he sent me over to see if there was any news from the world to be gleaned.” She grinned and threw her wheat colored braid back over her shoulder.
Cindy laughed. “Well, we were only just discussing the news in our own town. Do you remember the Thornbriars? They used to come into town two or three times each year, between spring and fall? They would usually stay a couple of weeks so their daughter could attend the school to see how she was doing, and take the grade tests and pick up new books. She would have been a little older than you and me.”
Amory tapped the pencil on the tip of her tiny nose. “Yes, I remember. She was so beautiful with her gold hair and really blue eyes. The girls wouldn’t talk to her because all of the boys were grinning at her, and the boys wouldn't talk to her because she was too pretty. But Fleur did. Talk to her I mean.”
Cindy nodded as they both looked at Miles.
“Well,” said Miles, scratching under his white whiskers. “I don’t know what to make of it, but as I was coming out here toward town, I looked back at the woods once. Trying to decide if I should come back when this rain passed and try again.” He rubbed his chin again, then scratched behind his ear, pondering.
“And?” encouraged Amory, her pencil scratching across the pages of her notebook.
“And that’s when I saw it.”
“Saw what?” gasped Cindy.
“Smoke,” whispered Miles. “A long, steady column of smoke stretching into the sky. Like you would see coming out of a chimney. Just a sleepy little column of smoke, barely a wisp. Then the wind blew, and it was gone.”
Amory whispered, “So we’ve got us a sleeping beauty in the woods?”


Enter to win a signed paperback of Twisted Dreams or eBooks of all three Sleeping Beauty retellings!