Tricia Mingerink's newest book, Midnight's Curse is here! It's a Cinderella retelling, which is super awesome because Cinderella is super awesome and she even watched the best version (Disney's 2015 live action) while writing it. :) I haven't read Midnight's Curse yet, since I haven't gotten very far in Dagger's Sleep yet (#adulting), but I'm really looking forward to reading it. I mean, Tricia wrote it. It has to be good.

I interviewed Tricia, but first, here's a little bit about the book. And don't forget to enter the giveaway and join the Facebook party! 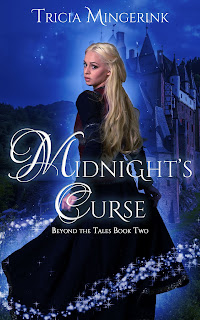 The glass slippers might be her dreams come true...or her worst nightmare.

High King Alexander rules the Seven Kingdoms of Tallahatchia—a divided nation on the brink of yet another war. When an invitation arrives from the king of Pohatomie, Alex knows it must be a trap, but could it also be his opportunity to unite the kingdoms?

Daemyn Rand has lived a hundred years, served an arrogant prince, fallen in love with a princess, and lost himself somewhere along the way. He has already died for his loyalty. Will standing at the high king’s side cost him his last chance to truly live?

Elara Ashen is a lowly, miserable servant. All she wants is to spend even one night in a fancy dress dancing with the high king. When she is offered a pair of glass slippers, it seems that all her dreams have come true.

But dreams have a price, and gifts can be curses in disguise. What will it cost to stop this curse from tearing Tallahatchia apart yet again?

Fairy tales meet the Appalachian Mountains in this adventurous fantasy retelling of the classic Cinderella story.

Add to Goodreads - Buy on Amazon 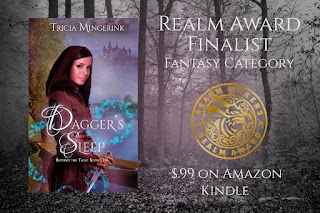 The first book in the series Dagger's Sleep, a Sleeping Beauty retelling where the prince is cursed to sleep and the princess must wake him, is on sale for $.99 on Kindle! Follow this link to snag this deal while it lasts!


Hi, Tricia, welcome to my blog! Beyond the Tales is a different sort of fantasy from Blades of Acktar. What inspired you to start writing fairy tale retellings?

I always get a chuckle out of this question. Because, honestly, The Blades of Acktar is the aberration from what I grew up writing. Many of the first books I wrote (which will never see the light of day) were fairy tale retellings. Dagger’s Sleep is even based on a horrible draft of a book I wrote when I was in 5th or 6th grade, though it is hardly recognizable as the same book.

Besides, fairy tales have such enduring themes. It is one reason they have lasted so long and are so integral to our culture. We use stories like fairy tales to examine life, even if we don’t realize that’s what we’re doing. Fairy tales tend to be so symbolic that merging a few allegorical elements into the story wasn’t a stretch.

What made you choose Cinderella for your second retelling, Midnight’s Curse?

It was a bit of a process. After Dagger’s Sleep, I thought I was going to write Mirabella’s story Beauty’s Beast, which is eventually going to be a Beauty and the Beast retelling. But, after Dagger’s Sleep released, I figured out, based on the feedback I was getting, that this series would be better off if I stuck with the established main characters through their character arcs before I branched into side characters.

So Beauty’s Beast was set aside, and I did some brainstorming with the other vague ideas I had for books in the series and settled on the Cinderella retelling. It ended up fitting what I needed this book to do character-wise very well.

What’s your favorite aspect of the traditional Cinderella story?

I love the transformation scene from torn gown to beautiful dress. I’m very much a tomboy, but even I love the feel of dressing in a beautiful gown just for a night. And most movie versions of Cinderella make the most magical moments out of it.

Funny thing is that I ended up including a much darker version of that transformation in my Cinderella retelling, lol.

How is Midnight’s Curse different from other Cinderella retellings?

My tagline for this book is: The glass slippers might be her dreams come true…or her worst nightmare. And I think that pretty much sums up the biggest differences in this version. The glass slippers aren’t exactly the innocent, beautiful things they appear to be on the outside. There are curses and traps and discontent lurking in the depths of human hearts that make this a rather unique version of Cinderella.

If you could just tell readers one thing about Beyond the Tales, what would it be?

That they deliver the same mix of rousing action and deep faith themes found in my Blades of Acktar series, just packaged a bit differently. If you like fairy tales, you’ll definitely enjoy them. But if fairy tales aren’t your thing, don’t be scared away. They are a mix of fairy tale and the Louis L’amour Sackett series I grew up loving as a kid, especially the book Ride the River.

Tricia Mingerink is a twenty-something, book-loving, horse-riding country girl. She lives in Michigan with her family and their pack of pets. When she isn't writing, she can be found pursuing backwoods adventures across the country. 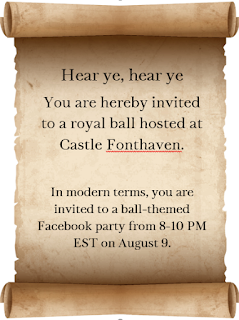 The Facebook party should be a blast with giveaways of Midnight's Curse, Dagger's Sleep, and over ten other Cinderella retellings by indie authors! Follow this link to join the Facebook party. 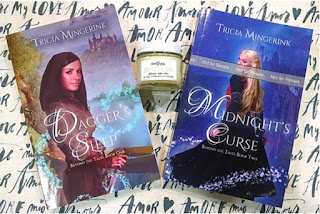 Enter to win signed copies of Dagger's Sleep and Midnight's Curse (it will be the actual copy, not a proof copy as shown) as well as a Currently Reading 4oz candle from Novelly Yours Candles.

Due to shipping, the giveaway is open to the US only. Void where prohibited.