Puddleglum, the only character Pauline Baynes asked for extra advice on how to draw. 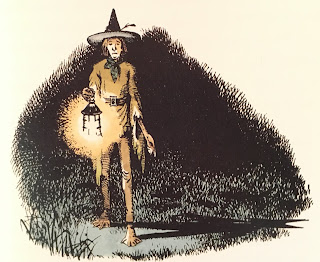 Puddleglum is a Marsh-wiggle. He lives in a wigwam in a marsh at the northern end of Narnia, just south of the Shribble and Ettinsmoor. He's quite a wet blanket, always expecting the worst, and, well, Eustace says he's always wrong, but that isn't strictly true.

Saying that the wood would be wet, or it would rain and put out the fire, or that eel stew would poison Jill and Eustace, or that inside the suit of armor could be a skeleton or someone invisible, or a hundred other things aren't quite true. But when it comes right down to it, Puddleglum is wise and sensible and he was the one who saved them all. 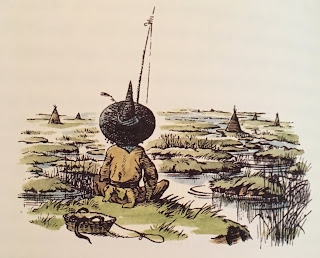 I do have to wonder, though, what the other wiggles are like. Considering "They all say—I mean, the other wiggles all say—that I'm too flighty; don't take life seriously enough. If they've said it once, they've said it a thousand times. 'Puddleglum,' they've said, 'you're altogether too full of bobance and bounce and high spirits. You've got to learn that life isn't all fricaseed frogs and eel pie. You want something to sober you down a bit. We're only saying it for your own good, Puddleglum.' That's what they say. Now a job like this—a journey up north just as winter's beginning, looking for a Prince that probably isn't there, by way of a ruined city that no one has ever seen—will be just the thing. If that doesn't steady a chap, I don't know what will." 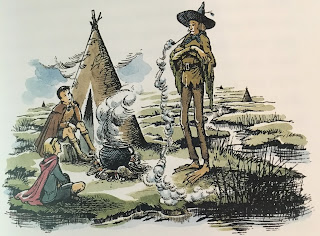 Puddleglum may overreact to imagined dangers, but when it comes to real ones, he's spot on. He didn't trust the Lady of the Green Kirtle, and he didn't think going to Harfang was a good idea. He did see that they were in a ruined city, he just wasn't forceful enough to make Jill and Eustace stop and see. He's loyal and determined, and helps the children do all they need to do in their quest. Even though Jill takes offense when he suggests she isn't remembering the Signs correctly. He's far from perfect, what with his wet blanket, pessimistic complaints, but he's still wonderful and has some good quips. Like this bit:

"Many have taken ship at the pale beaches," replied the Warden, "and—"
"Yes, I know," interrupted Puddleglum. "And few return to the sunlit lands. You needn't say it again. You are a chap of one idea, aren't you?"

And I love this:

"And you must always remember there's one good thing about being trapped down here: it'll save funeral expenses." 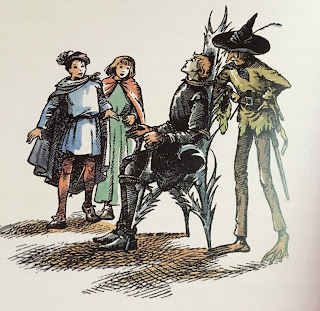 But the best part about Puddleglum, and I think everyone will agree, is his speech in Underland. I'll let it speak for itself.

"One word, Ma'am. One word. All you've been saying is quite right, I shouldn't wonder. I'm a chap who always liked to know the worst and then put the best face I can on it. So I won't deny any of what you said. But there's one thing more to be said, even so. Suppose we have only dreamed, or made up, all those things—trees and grass and sun and moon and stars and Aslan himself. Suppose we have. Then all I can say is that, in that case, the made-up things seem a good deal more important than the real ones. Suppose this black pit of a kingdom of yours is the only world. Well, it strikes me as a pretty poor one. And that's a funny thing, when you come to think of it. We're just babies making up a game, if you're right. But four babies playing a game can make a play-world that licks your real world hollow. That's why I'm going to stand by the play-world. I'm on Aslan's side even if there isn't any Aslan to lead it. I'm going to live as like a Narnian as I can even if there isn't any Narnia. So, thanking you kindly for our supper, if these two gentlemen and the young lady are ready, we're leaving your court at once and setting out in the dark to spend our lives looking for Overland. Not that our lives will be very long, I should think; but that's small loss if the world's as dull a place as you say."

He's faithful and amazing, and as Jill put it, "You're a regular old humbug. You sound as doleful as a funeral and I believe you're perfectly happy. And you talk as if you were afraid of everything, when you're really as brave as—as a lion."

He really is quite the reshpeckobiggle. XD 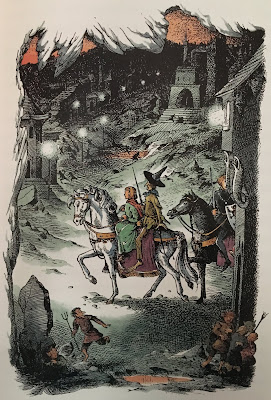 *all pictures are photographs of my copy of the full-color collector's edition of The Silver Chair, illustrated by Pauline Baynes
Posted by Morgan Huneke at 6:00 AM