I'm updating Espionage to match Time Captives! Espionage is integral to understanding Briznom's role in Crannig Castle; however, it's been sort of left out in the cold. On its own. But no more!

I've got the cover redone, and those who have seen it love it! It's still the same general concept (I couldn't get rid of that) with the same model. Incidentally, the same girl I mentioned last week as being my student/honorary lil sis in our Hunger Games medley. See why I couldn't change it? But I did put her in a better forest, played with the photo effects, and redesigned it to match Time Captives. I have a proof copy on the way for the paperback, and I have something special planned for the ebook. More details on that coming soon. :)

Now, when I did the original edition, well, I decided last minute to draw pictures for chapter headers. In 2 1/2 days. Because I is crazy. Well, I was happy with most of them. Particularly the one of Vannie for the last chapter. But the one for the penultimate chapter...well, let's just say buildings are NOT my favorite thing to draw, I was tired of drawing, and I cheated. This is how it turned out. 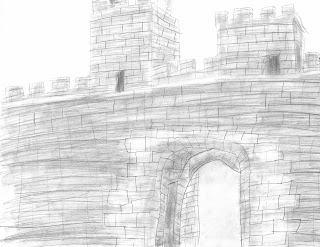 I didn't like it, even from the start, but I was too tired and lazy and ready to get a proof to redo it. So I promised myself that when I did a second edition sometime in the future, I would redraw the picture. I hate me.

I hadn't intended to do this second edition so soon any more than I had Time Captives, but after Realm Makers, I decided I needed to go ahead and [details redacted] and to do that, I needed to do this second edition. So out came the sketch pad and the pencil and the reference pictures (well, the sketch pad was already out because of another secret Time Captives project I'm working on), and did just about everything else before I actually drew the picture. Because all the tiny little rocks. 😠 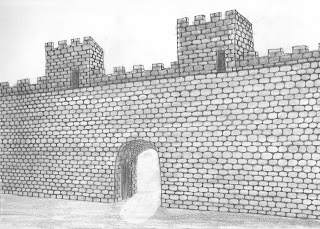 And now I can't wait to get my proof and share it with you and announce what I'm doing with the ebook, and with my other Time Captives project (though that one's much more labor intensive and will take a while), because it's going to be awesome!

But I've just got to say, this sign for a library display was MUCH more fun to draw. 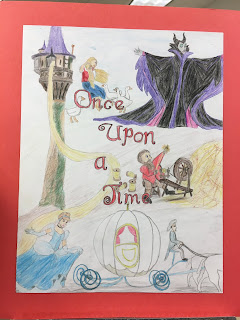