Week one of Camp NaNoWriMo is now over. I think I'll learn a lot throughout this process. I'm learning that I'll never have just limitless time to devote to writing. Life happens. I have to learn to make time to write, as my successful NaNoer friend Ashley told me. I've been more active about taking those extra few minutes to write than usual, though I've still wasted a bit too much time catching up on blog reading and stuff than I should. I'm NaNoing and helping finish a basement. I don't have time for blogs. But anyway. I'm also learning that this chart is a great motivator. I really want to make my bars reach that line. 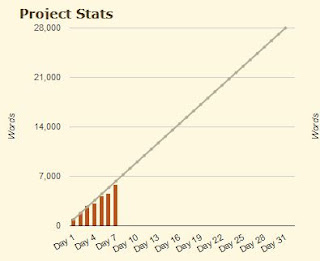 I'm making good progress. I'm technically 524 words behind, but I have time to catch up. Or so I think. I wrote 5,798 words this week, getting me almost to the "second pinch point" in the story. And I'm really loving this book. I'm not really sure I'm getting it quite right, but that's what 2nd, 3rd, 4th, and 5th drafts are for. And despite having the book plotted, I'm getting surprises along the way. It's a cool story. So I'll try to find non-spoilery excerpts to share.

He followed the signs on the wall. And stopped outside the door. Matthew would be expecting him. But he was understandably hesitant to come face to face with his brother after these long eight years. He raised his hand and knocked at the door.

It swung open to reveal the familiar form of a man. His jet black hair was neatly cropped and his office white face was clean shaven. He wore a white lab coat that barely revealed the khaki pants underneath. As George met his gaze, he was reminded of how, upon meeting him for the first time, Ariana had observed that she had not known it was possible for brown eyes to be so hard and cold.

"What have you come here for?" Matthew's voice had lost none of its old resentment. "You know you're not welcome."

George is a secondary character, but there was something that needed to be done for the MCs, he was a great one to do it, and...I ran into a ghost in his past. Of course then I had to follow him on it. It was hard not knowing what that ghost was, but I think I have it sort of figured out, and I'm driving my sister crazy by not telling her. :D Now let's find one from my main characters.

"The engine is still shot and the generator is drained."

So he was in the Alary. She stepped into the common area. Luke sat on one of the sofas, his hands clasped in front of him, his elbows resting on his knees, a dejected air about him.

Cassie approached slowly and sat down beside him. She heaved a sigh, unsure of exactly what to say. Her gaze wandered about the room, the angular furniture casting deeper shadows on the darkened floor. So briefly had it been her home. So briefly had she known Luke. As one of the more prominent Seniors during her first year at the Pilot Academy, he had intruded on her peripheral vision, but still, she didn't really know how to reach out to him.


So that's week one. We'll see how week two goes!
Posted by Morgan Huneke at 6:00 AM