Building Our Wall Part 1: The Wall of Jerusalem

America is in trouble. I don't even think I need to tell you that. Over and over, we see victories of the enemy: the continuance of abortion, the Supreme Court ruling on gay marriage, the continued stories of children forbidden to pray at school, the removal of freedoms, the condoned mobs, continued shootings, attempts to fix the symptoms rather than the problems that end up making the problems worse, not better, etc. It's never ending. America is under attack. Christianity is under attack. And we cannot stand by and just let it happen. I have much to share on this subject, many stories and analogies and important points that I have heard from more than one person. It is interesting to me that two different people have spoken on the same subject independently using much the same analogies. It made an impact on me, so I feel I must share it. There is a lot I have to say, so I'm splitting it into multiple parts. And I'm beginning with Nehemiah.

The wall of Jerusalem was broken down. It was nearly destroyed. The Jews had no protection. Their city was a disaster. They had not kept God's Law, and it cost them.

"So I went to Jerusalem and was there three days. Then I arose in the night, I and a few men with me. And I told no one what my God had put into my heart to do for Jerusalem. There was no animal with me but the one on which I rode. I went out by night by the Valley Gate to the Dragon Spring and to n the Dung Gate, and I inspected the walls of Jerusalem that were broken down and its gates that had been destroyed by fire. Then I went on to the Fountain Gate and to the King’s Pool, but there was no room for the animal that was under me to pass. Then I went up in the night by the valley and inspected the wall, and I turned back and entered by the Valley Gate, and so returned. And the officials did not know where I had gone or what I was doing, and I had not yet told the Jews, the priests, the nobles, the officials, and the rest who were to do the work. Then I said to them, “You see the trouble we are in, how Jerusalem lies in ruins with its gates burned. Come, let us build the wall of Jerusalem, that we may no longer suffer derision.” And I told them of the hand of my God that had been upon me for good, and also of the words that the king had spoken to me. And they said, “Let us rise up and build.” So they strengthened their hands for the good work." --Nehemiah 2:11-18

In much the same way, America is broken down. We have abandoned God's commandments. We have abandoned our Constitution. Evil runs rampant. "Tolerance" includes tolerating every kind of deviant behavior, but somehow excludes tolerating Christianity. The news is full of shootings, suicides, robberies, murders, scandals, and the promotion of things we as Christians know are wrong. Our walls are broken down. Let us rise up and build. 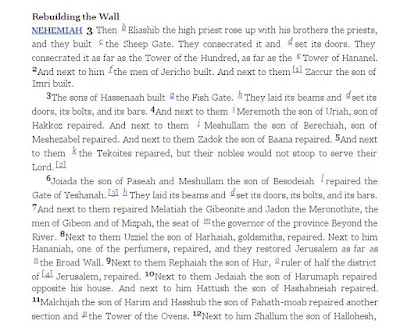 In that same manner, we must repair our part of America's wall. Whether that's business, or entertainment, or education, or media, or government, or the Church, or the family (though we all should be a part of the Church and the family), we build that wall. We bring God's truth into that area. We shine His light in our tiny corner of the world. Because every one of us is different. Everyone has a different part of the wall to build.

"Now when Sanballat heard that we were building the wall, he was angry and greatly enraged, and he jeered at the Jews. And he said in the presence of his brothers and of the army of Samaria, “What are these feeble Jews doing? Will they restore it for themselves? Will they sacrifice? Will they finish up in a day? Will they revive the stones out of the heaps of rubbish, and burned ones at that?” Tobiah the Ammonite was beside him, and he said, “Yes, what they are building— if a fox goes up on it he will break down their stone wall!” Hear, O our God, for we are despised. Turn back their taunt on their own heads and give them up to be plundered in a land where they are captives. Do not cover their guilt, and let not their sin be blotted out from your sight, for they have provoked you to anger in the presence of the builders. So we built the wall. And all the wall was joined together to half its height, for the people had a mind to work. But when Sanballat and Tobiah and the Arabs and the Ammonites and the Ashdodites heard that the repairing of the walls of Jerusalem was going forward and that the breaches were beginning to be closed, they were very angry. And they all plotted together to come and fight against Jerusalem and to cause confusion in it." --Nehemiah 4:1-8

The Enemy will not sit idly by and watch us rebuild our wall. If he did, we would not be in the mess we are in today. He will mock and fight against us. We can see it happening already. We as Christians are not allowed to abide by our faith if it collides with the very vocal enemy. Look at all the children who are told they can't read the Bible or pray at school. Look at Hobby Lobby's suit over Obamacare trying to force them to provide birth control. Look at the bakers being taken to court for refusing to provide a cake for a gay wedding. We are under attack today, just as Jerusalem was under attack from Sanballat. And the more we build our wall, the more we stand up for what's right, the more the Enemy will fight us.

To be continued: Part 2: Defending the Wall
Part 3: The Importance of Unity

Note: All Scriptures taken from the English Standard Version of the Bible.
Posted by Morgan Huneke at 6:00 AM