And I'm just barely ahead. I caught up Thursday, got a little behind Friday and Saturday, had a decent day Sunday, a fantastic 2,193 word day Monday, and was distracted Tuesday by two friends and our crazy idea for a very awesome if we can pull it off project, so I'm just about 18 words ahead. But good progress. It's getting exciting, and it's just about to get REALLY exciting. I'm really looking forward to what will happen this week. Anyway, here's my stats: 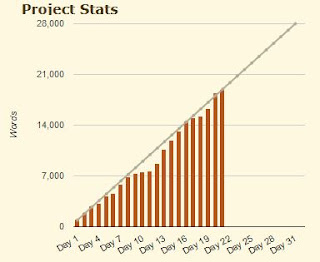 Looks pretty good. And for an excerpt.

Down near the foot of the table was a familiar face. Garen.

Cassie's eyes locked with his. He kept his face solemn and controlled, but in his eyes she could see he was glad to see her. She too was glad to see him. His gaze sent a surge of confidence into her. Whatever the Council wanted from them, Garen was here and he would always support her, just as he had done back on Owen Base. She longed to talk to him, to tell him all she had learned, the answers to so many questions she had voiced to him alone, but she knew it would have to wait.


I've missed Garen. There have been a few small scenes with him scattered throughout, but this section has the most with him since basically the beginning. And next chapter is about Luke. I really love that guy. He's pretty awesome.

My sister has been kind of annoyed because of this:

She says I'm finally really becoming an evil author. As a reader, she doesn't like my driving her crazy in this way. I'm enjoying it. But in a little over a week, this book should be done and she'll be happy. Then I'll really have to get on the subject of choosing a real name for it...
Posted by Morgan Huneke at 6:00 AM