Half-Blood is here! I'm sure by now you know that I love Ilyon Chronicles. Half-Blood is no exception. It is Jace's story, hard to read because of all he went through, but that only makes it more powerful. I'll talk more about it in my review below. But first, here's the info about the book and an author interview! And don't forget to enter the giveaway!

About the Book
The gasps and murmuring grew. Though some were hardly more than whispers, clear words reached Jace’s ears—dangerous, monster, animal, soulless. He tried to back away from their accusing eyes, but the collar pulled hard against his throat and held him in place.
For all his years as a slave, Jace has known nothing but the hatred people hold for his mixed blood—one half human, the other half the blood of a race considered monsters. Always, he is the outsider and quickly learns it is better to keep to himself. But, when his volatile ryrik blood leads him to do the unthinkable, he is thrown into a world of violence and bloodshed.

Forced to become a gladiator, Jace finds more and more of his heart dying as his master works to break down his will not to become the monster everyone believes he is. When a stranger interferes with his master’s harsh punishment, Jace’s world is upended yet again. But with it comes the possibility of hope that has long since died. Could the man possibly hold the key to escaping the hopeless darkness that is Jace’s life? Is there such a thing as life beyond the cruelty of slavery?

Interview
M: Hi, Jaye! Welcome to my blog! Can you tell us a little bit about yourself?

J: Hey! Well, I’m in my mid/late twenties, a country girl, hopeless romantic, and adore history and Christian fantasy. I was homeschooled K-12, so that gave me a do-it-yourself outlook that has really helped in writing and publishing. If I’m not writing or doing writing related things, I’m either filling orders for my Etsy jewelry shop, reading, going on outdoor adventures, watching movies and TV shows, or sewing a costume or historical outfit.

M: We’re here to talk about Half-Blood, the prequel to the amazing Ilyon Chronicles, a story about Jace’s past as a slave and gladiator. So, Jaye, what was the hardest part about writing Half-Blood?

J: Probably just trying to keep everything straight. I started writing it probably four or five times, going back in time further and further with each restart. It was supposed to be a short story that started just before he met Rayad, but it just kept growing until it spanned many years. So I had to make sure each event happened when and where it should. It was a bit complicated. Still, this was one of the easiest things I’ve written. Not because of the subject matter (which isn’t easy), but it just flowed really well. Even with all the restarts, I finished it in just a few weeks.

M: I'm glad you started it where you did. Six-year-old Jace is so cute. You’ve called Jace Your Precious before. :) When you first started Ilyon Chronicles, did you ever think he would become such a special character to you?

J: I always knew Jace was special, even from the beginning. I related to him so well. What I didn’t ever think about was how special he would be to readers. Of course, you always hope your readers will love your characters, but this is the first time I’ve written a character who has had so many fangirls. It’s so much fun. :)

M: Jace is definitely a special character. He deserves his fangirls. :) I try not to be too much of a fangirl, but I can identify with Jace's fangirls.

Jace. My sister jokingly says that Ilyon should be called the "Poor Jace Series" and nowhere is that more true than in Half-Blood. This is the story of Jace's past. Not where he comes from, that's in yet unpublished books, but Jace's recollected past. His growing up years. His years as a slave and a gladiator. The cruelty he received. How it shaped him into the Jace we all know and love.

We see him as a little boy trying to be kind, to stand up for defenseless animals, we watch him have his first struggle with his ryrik blood when standing up to a bully, we feel his brokenness as he goes through life friendless and alone, called a soulless monster, we cry over Jasper's treatment of him, we hold our breath as he goes into the arena. And then...

The end of the book overlaps the beginning of Resistance. And we see, more than ever, how much simple kindness means. How hard it is to accept after a lifetime full of nothing but cruelty and mistrust. How great a light it shines.

This book is a tough read. While not overly graphic, Jaye does not shy away from painting a picture of the true bleakness of Jace's previous existence. For it really is more of an existence than a life. But as horrible as it is, it only makes the good mean so, so much more.

Even though it is a prequel, I recommend reading at least Resistance prior to Half-Blood. But once you have entered Ilyon, pick up Half-Blood. More Jace is always good, and...it makes his story mean more than it possibly could have before. 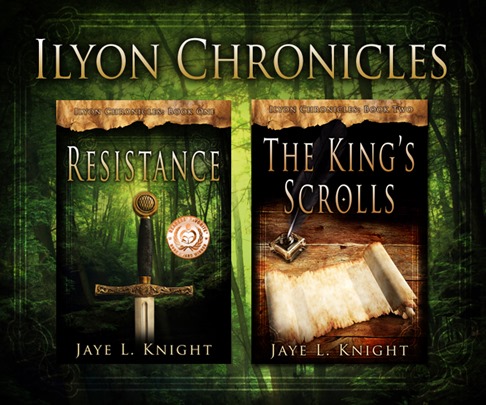 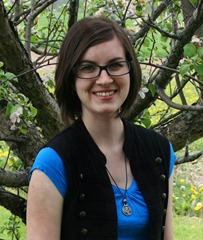 You can connect with Jaye on her website, blog, Facebook, Google+, Twitter, Etsy, and on her new fiction forum where you can interact with other readers of the series.

Giveaway
Share in the excitement of the release and enter to win a themed giveaway pack! Prizes include an autographed copy of Half-Blood, a blue feather bookmark hand crafted by Jaye, a bronze sword pendant, and a $5 Amazon gift card! (Giveaway is open to US residents only. Cannot be shipped internationally.) 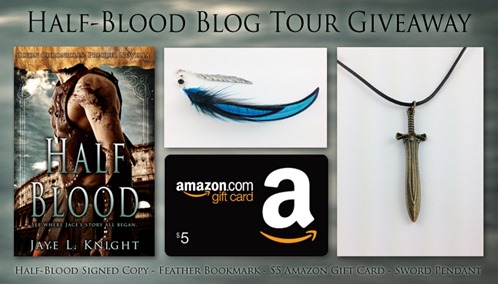