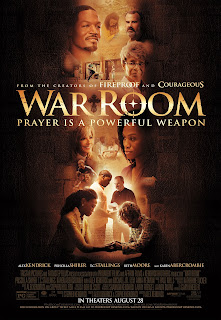 War Room by the Kendrick Brothers

Tony and Elizabeth Jordan have it all—great jobs, a beautiful daughter, and their dream house. But appearances can be deceiving. Tony and Elizabeth Jordan’s world is actually crumbling under the strain of a failing marriage. While Tony basks in his professional success and flirts with temptation, Elizabeth resigns herself to increasing bitterness. But their lives take an unexpected turn when Elizabeth meets her newest client, Miss Clara, and is challenged to establish a “war room” and a battle plan of prayer for her family. As Elizabeth tries to fight for her family, Tony’s hidden struggles come to light. Tony must decide if he will make amends to his family and prove Miss Clara’s wisdom that victories don’t come by accident.

Wow. Where do I even start? So I just got back from War Room. (Well, at the time of writing, it's a scheduled post.) This was my first time seeing a Kendrick Brothers movie in theaters. And what an experience. Let me just say that this is a movie everyone needs to see. I rarely cry at fiction, but I had tears in my eyes multiple times. "I laughed, I cried, it moved me, Bob." It was so powerful. It was inspiring. And seeing it in theaters just made it even more amazing. Sitting there in a packed theater, hearing the crowd react to the various elements of the story, seeing how many people came out for this movie, it was amazing. And at the end, everyone clapped. I've never been to a movie where people clapped at the end before. (Granted, I've only been to the movie theater 13 times, and in all but like 2 of them there were hardly any other people in the theater, but still.)

Now, I want to talk about the film quality. I'm not one of those people who will promote a poorly made film just because it's Christian. Maybe I'm a story snob. I don't care. I believe Christians have a responsibility to make high quality entertainment. I'm not going to rave about films with poor filmography. I'm not going to promote films with bad acting. If a movie has a poorly written narrative that tries to do too much at once and thus causes the whole thing to suffer, I'm going to pick it apart and identify all the things they did wrong. Not all of the Kendricks' films are high quality productions. I actually had a conversation Sunday about how their first film, Flywheel, is difficult to watch because the acting and filmography are so bad, the conclusion being that they should remake it now that they know what they're doing, since they actually had a really good story with a really good message.

War Room is not one of those poorly made films. I have one complaint about the quality, and one only. The robber who tries to hold up Liz and Miss Clara was very unconvincing (like, not at all convincing). Other than that one maybe 30 second long scene, if that, the quality was that of a fully professional film. And honestly, I've seen bigger name films that I have more technical complaints with.

The writing was fantastic. While I had a handful of writing complaints with Courageous, I can't think of any with War Room. It was a tightly written narrative, the characters had unique and realistic ways of speaking, and that dialogue. Oh my goodness, I must see it again to memorize it. The Kendricks know how to sprinkle in the humor. I mean, whenever I wanted to laugh at something, so did everyone else in the theater. They know how to make you cry. And they know how to write a powerful story that really means something.

Now that I've hopefully convinced you that this is a quality film and not some hokey, cheesy Christian flick like so many I've suffered through on Netflix, let me talk to you about the story itself. This is a story about the power of prayer. That is the main theme, and yet there is so much more. It is a story about broken people. People whose family is on the brink of destruction. A couple that never communicates. A woman who is fed up with her husband. A man who is quite literally considering cheating on his wife. Parents who don't really even know their sweet, cute ten-year-old daughter. And a little old lady (she reminds us of my great grandma) who teaches them the power of prayer. The story focuses on Elizabeth Jordan (called Liz by basically everyone except Miss Clara) and her struggles with her jerk husband Tony (ironically, the gang leader from Courageous). Their daughter Danielle is also an important figure in the story. Liz is a real estate agent whom Miss Clara calls to sell her house. But Liz becomes so much more to Miss Clara than simply her real estate agent. Miss Clara sees in Liz a woman who needs the help Miss Clara needed herself. She teaches Liz to stop fighting her husband. To recognize the real enemy. To rely on God. To let Him do the fighting for her.

And Miss Clara shows Liz her "war room," the closet where she spends so much time fighting in prayer. The way we're supposed to fight.

I don't want to say too much more for spoilers' sake, but there are struggles, dark secrets brought to light, tough situations, and hope. Restoration. A happy ending. Sure, I expected a good ending, considering who made the movie, but that didn't make it any less amazing and powerful and inspiring. From the applause at the end, I suspect the other moviegoers felt the same way I do: This is an amazing film, so, so good. It means so much.

I'd heard a lot about how good War Room is. I was told I needed to see it. Now I join in with all those people. War Room is a fantastic movie, and you need to see it. Everyone needs to see it. And learn about the amazing power of prayer.