"How 'bout a girl who's got a brain
Who always speaks her mind?"
I started thinking about common characteristics in my favorite female characters because I'm having trouble connecting with Hadassah in Mark of the Lion, and I wanted to figure out why. I think it's because she's kind of mousey. She's firm in her faith, and she's kind and giving, which are all great characteristics, but she has very little spunk, and she's not particularly stubborn. She's never going to tell someone off the way Gwen did Arthur (quickly followed by ducking her head and saying, "my lord" 😆), she's never going to take down a droideka, and I kinda doubt she knows what banter or friendly bickering even is. So basically I tend to like my girl characters spunky and stubborn with something of a mouth on 'em. Wonder what that says about me...😉
As a kid, there were three characters I very badly wanted to play in a movie or TV series: Jill Pole (Narnia), Meg Murry (A Wrinkle in Time), and Darra Thel-Tanis (Jedi Quest series). I'm too old for...all three of them now, but I stand by my opinion that I could have pulled off Meg way better than the girl in the 2017 movie. She was just too sweet to make Meg's attitude believable. Anywho, on to the characters themselves. 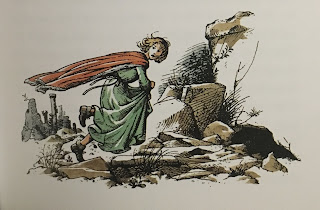 Do I want to admit the ways I relate to Jill Pole? I guess I'd better. Jill argues a lot. I mean, it's pretty constant. She's easily distracted from her quest by the idea of hot baths and sleeping in a bed again. (I like being outside and I like the idea of adventures, but, yeah, I think I'd have been tempted by Harfang too.) And she's squeamish to begin with. Throughout the fight with the serpent she was going "I hope I don't faint—or blub—or do anything idiotic." (Though she did fight and kill enemies in The Last Battle. She got tougher for sure.) She's certainly not the mousey, sweet kind of character. She's stubborn, not afraid to say what she thinks, kind of a showoff at the beginning of The Silver Chair, and she develops skill with a bow and arrows, and with tracking and moving silently through the woods. Ooh, does that mean that by The Last Battle, she was a Ranger? But I know the Four Signs better than she did. I'm still proud of that fact.

I always really connected with Meg. She's got a temper, she's stubborn, she's determined, and she really loves her family. (Still want Charles Wallace to be my little brother.) And yes, she has kind of an attitude. I'd like to think I grew out of the attitude I had when I met Meg Murry, but I'm sure I could tap into it if I wanted to. She has some major flaws, but your weaknesses are always your secret strengths. She learns to turn that stubbornness in a positive direction, holding onto her love for her brother with a tenacity unparalleled. I need to go reread this book for the millionth time. 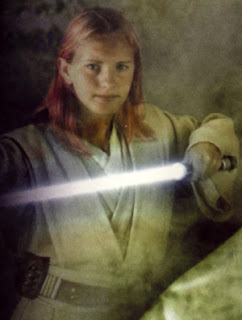 Okay, so Darra's a little different because she's the kind of person I want to be. She's a determined sort too, and she's good with a lightsaber (except when Anakin accidentally pushed her into the line of fire or in that whole disaster on Korriban that was not her fault, but anyway). She's positive and selfless and cheerful and kind, and I love her wisecracking, sarcastic sense of humor.
*after Anakin and Ferus agree on something for one of the only times ever* "We have an agreement. Remind me to declare this an annual holiday once we get back to the Temple."
“Remind me to get you guys the next time my comlink malfunctions. You’d probably rebuild it into a cargo lifter.” 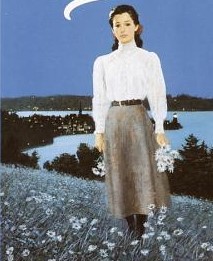 Anne is the character everyone knows. Emily is the L.M. Montgomery character I relate to most. She's also stubborn, and though she's not the chatterbox Anne is, she will say what she thinks. (Well, except when it comes to Teddy. Those feelings she holds close, and that's a situation she's also very stubborn in.) She's got the "Murray pride" for sure. Emily's "Flash" is the same kind of feeling I always got when reading the last few paragraphs of The Last Battle as a kid. She's very serious about her writing, determined to climb the Alpine Path. She's destroyed writing she wished she hadn't, though Seller of Dreams was good, and I just think it would be fun if I could pull out "The Silly Monster and the Seven Orphan Babies" or "Seven Dogs for Anda." Writing is as much a part of her as breathing, but she also went through a period of time where she couldn't write. I've written multiple letters to myself in the future because Emily did. And when I read the Emily books, I feel understood.
I mean, Peeta's my favorite character in THG, hands down, but Katniss is still important to me, and I'm not sure Emma Edsel would be here without her. She's also a stubborn one...stubborn and good with a bow, as Peeta said. Her life story is a tragic one. She'll never be the same. She may be stubborn and not come off as a nurturing sort, but she's willing to sacrifice everything for her sister. And while some of her decisions as her mind goes cuckoo may be questionable, it's undeniable that her initial motivation comes from a good place.

Stubborn, spunky, got a mouth on 'er...yup. Anne fits the bill. I do relate to Anne, even though I relate to Emily more. I'm a chatterbox, and have I mentioned I'm stubborn? I've got a wild imagination... I think we all probably know Anne pretty well, so I'll leave this here. (But I'm never dyeing my hair. Anne scarred me for that.)

Belle's a good mix of sweet and spunky, and that's what I love. She's willing to look past the outward appearance and see the heart, but she's also not afraid to yell at people if that's what needs doing. "You should learn to control your temper!" She's fiercely loyal, and self-sacrificial when it comes to her loved ones. She has to be pretty stubborn to hold out against Gaston as she has. And she loves books.

Feistypants. 😁 Anna's a very determined sort of individual. She won't leave Elsa no matter what, and even charged up the mountain by herself still in her ball gown in the snow. She's quirky and fun, but I'd say she qualifies for stubborn. And Kristoff even calls her "feistypants." 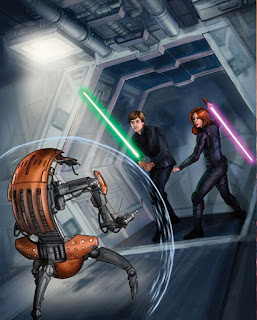 Mara Jade Skywalker is really cool. She's stubborn and loyal and her son got his mouth from somewhere. 😉 I really do love when she calls Luke "Farmboy." She's very capable; she was trained as an assassin by Palpatine. I suppose you could describe her as a Jedi Black Widow. But what I also love about Mara is that even with her background and her skills and her personality, she's a good team player (at any rate, when Zahn writes her), and especially when she's teaming up with Luke. She's totally willing to argue with him when he wants to put himself in danger doing something they both know suits her skill set better, and she wins the arguments, but she's not afraid to step aside and let him do the thing when it's something he's better at. She's probably not "feminist enough" (kinda like Claire from Jurassic World) because despite being so awesome and capable, she's very much in love with Luke and is proud to be his wife, refusing to let people leave Skywalker off of her name. But that just makes me love her more.

Snips is also stubborn and has a mouth on 'er. 😆 She's snarky and impulsive, brave and kind, and she goes through so much. She was a cocky little thing when we met her, and she's so much more mature by the Siege of Mandalore. Disillusioned in regards to the Jedi, after how they handled what Barriss did to her (still mad about that), but Trace and Rafa recognize in her what a Jedi should be. Someone selfless who helps people. Plus Ahsoka's just plain cool. And her banter with Anakin is great. They're such siblings. And it's too soon after finishing the Final Season, so I need to go cry.
I have to make a list of some honorable mentions, because my list was way too long and I had to cut some. So here goes. Kit Tyler (The Witch of Blackbird Pond), Polly Plummer (Narnia), Eilonwy (Prydain), Siri Tachi (Star Wars Legends), Kyrin Altair (Ilyon Chronicles), Aravis (Narnia). And I could probably go on, but I think those are the most important.
So yes, I like stubborn girls with spirit, who aren't afraid to speak their mind, but I also like them to be compassionate. To love their families, and be willing to help others. Not every character I love has every characteristic I like, obviously, but these are the sorts of characters I can relate to, characters I can find something of myself in.
And I still want to be Jill Pole.
Posted by Morgan Huneke at 6:00 AM